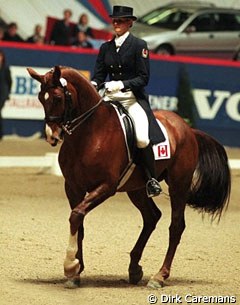 With the retirement of Penny Zavitz' Winsome (Hanoverian by Windesi xx) and Christilot Boylen-Hanson not being able to make a serious entrance in the dressage top, Canada is craving for a new substitute.

Although this North American country was able to present a complete team at the 1998 World Equestrian Games, their dressage unit could not make a stand against the equestrian countries like Germany, Sweden, Holland and the United States.

But hope rises in the horizon. 25 year old Dana Hewett qualified for the World Cup finals by leading in the Royal Winter Fair Grand Prix test with 63.76% and the Kur with 67.56%. The combination flew to Europe to ride their finals in Dortmund, Germany. With Enfantico, a beautiful 8 year old Hanoverian mare by Wenzel I out of an Akzent I daughter, Dana placed 13th. A performance which launched her to the 38th place in the FEI Rider's Rankings

For many Canadians that performances sounded like a disappointment but enthusiasts see a new break through for Canada. Dana and 'Cody' are now training in the United Kingdom with the Finnish Kyra Kyrklund. At the Ardingley Premier League Show they won the Grand Prix open with a score of 61.47%. Complete coverage of the 1998 Royal Winter Fair and more news reporting on Canadian dressage at http://www.equestrian-connection.com