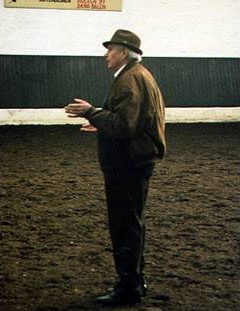 For 78 year old George Wahl a three day clinic plus a flight to Brussels and back to Vienna demands great physical effort. Even though he looked very fatigued on Monday 22nd March 1999 his enthusiasm in training the Belgian Grand Prix and Prix St. Georges riders was beyond limits.

In great detail he explained the importance of keeping your horse loose, through the back and energetic without pushing, pulling or forcing it. Several new PSG combinations got the opportunity to enjoy Wahl's tutoring for three days at Dressage Stable De Steppe in Mol, Belgium. Catherine Bacqville rode her former Belgian young dressage horse champion Intact with great elegance while Marleen Loomans was able to present her frisky and nicely ridden Trakehner Escudo. Grand Prix riders Ludo Verbraeken and Ann d'Ieteren refined their skills again in those short three days. Remy Martin, ridden by Stefan van Ingelgem, made good progress during the clinic and seems to be a very pleasant horse to work with.

At age 78, George Wahl  still daily trains horses with life partner Christine Stuckelberger in beautiful Kirchberg, Switzerland. He first started his equestrian career at the Spanish Riding School of Vienna. He trained Lippizaners with the world renown "ausbilder" Podajski for fourteen years. After that era, he trained horses for the circus Knie, but in the meanwhile he became the coach of Christine Stuckelberger. This Swiss woman is now at age 55 and achieved more in her life than Dr. Reiner Klimke. With Granat she became Olympic Champion in the seventies. In 1985 she won the World Cup Kur to Music in Rome with Rubilet. In the same year her Gaugin de Lully was a multiple Grand Prix winner. With Aquamarin, a Westphalian gelding, Stuckelberger regularly pops up in the top ten at imporant CDIs.