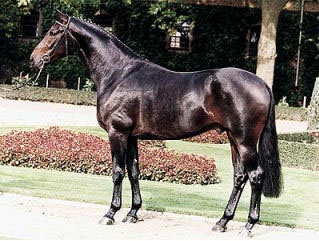 Stallions like Paradox, Pilot, and Fruhlingstraum made the Westphalian Association very famous. Yet at the 1998 Westphalian stallion approval it was an Oldenburger sire, Donnerhall, who produced the champion stallion in combination with the Westphalian Rosenkavalier x Apart.

Dressman has been several times German Dressage Pony Champion under Astrid Buer (who is now a young rider) and Desiree Schurf (fourth at EC 1998). The Westphalian auctions often feature quality dressage ponies which are sired by the chestnut Dressman.