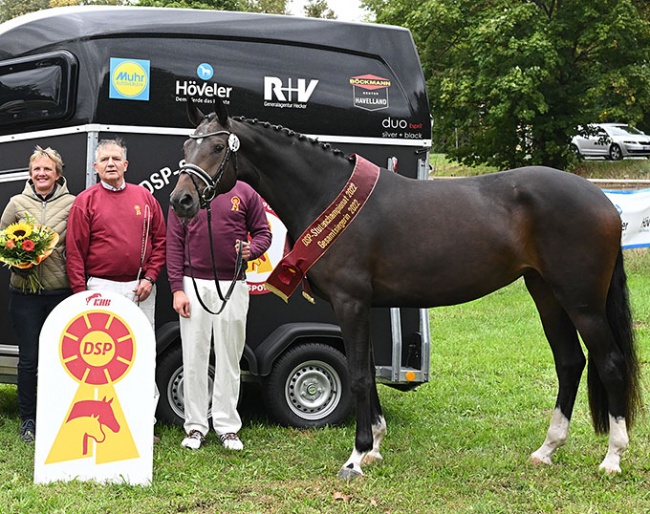 A group of 34 mares, aged 3 and 4 and show jumping and dressage bred, gathered in Darmstadt to compete for the title of DSP Beauty Queen.

In the 3-year old age group Julia Voigtländer's home bred Quty (by Q-Sieben x Sir Donnerhall x Don Picardo) scored the highest total of 8.92 points and was named champion. The mare successfully scored 8.85 in her mare performance test (8.73 for jumping, 8.83 for dressage) and in Darmstadt she earned a 9.5 for type. Voigtländer has competed the now 11-year old dam So Nice in the riding horse test

Quty edged out Fiorella (by For Final x Laurentio x Gribaldi x Kalman) for the title as this mare placed second with 8.58 points. Fiorella is bred by Matthias Schönenberger and owned by Knoll GbR.  This chestnut mare scored 8.8 in her mare performance test earlier in the summer.

Third spot went to Mallorca (by Morricone x Furstenball x Sandro Hit x Brentano II) with 8.58 points. Bred by Landwirte Jung, the bay mare was purchased by Ludwig Fischer of Gestut Greim at the 2019 DSP elite foal auction for 10,500 euro. She was named Miracle at the time. This summer Mallorca got 8.08 in her mare performance test.

In the 4-year old division offspring by Vitalis made their mark taking the champion and reserve champion's titel. Ludwig Fischer's home bred Vjera (by Vitalis x San Amour x Donnerhall x Raphael) bested the field with 8.75 points. She had scored 7.89 in her mare performance test (8.88 for dressage, but only 6.83 for show jumping). Under Chiara Göbel she competed at the 2022 Bundeschampionate earlier this month.

The bay mare Farella (by Blue Hors Farrell x For Romance x Dir Donnerhall) finished third with 8.33 points. She is bred by Johannes Gaab and owned by Hubert Birkenmayer. In her mare performance test she had scored 7.86 points

At the end of the day Quty was also proclaimed overall champion when the three winners - Quty, Vjera, and show jumping champion Laurena (by Karajan x Casiro) - faced each other for the ultimate day champion sash. The reward for the breeder/owner was a horse trailer