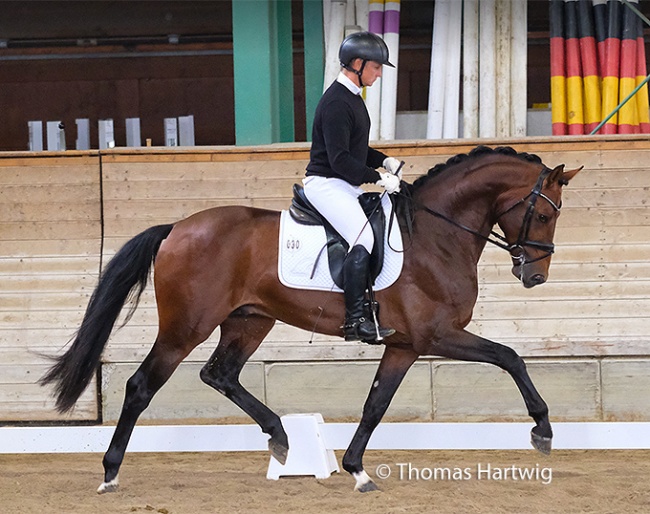 The state stud in Warendorf organized a third "shortened suitability test" for newly licensed breeding stallions on 12 - 14 September 2022. Extra Gold the Westfalian licensing champion of 2021, became the high scorer of the three-day testing.

For Extra Gold (by Escolar x Apache) it was a re-match as the stallion was excused from the spring testing after showing some resistance under test rider Jana Freund. Bred and owned by Bettina Hinnemann, the bay stallion got a second chance and this time showed impeccable behaviour. He scored 8.6 for trot, 8.7 for canter, 7.5 for walk, and 8.5 for rideability and willingness to perform. His total was 8.36 points

The second best scorer was Banksy Coeur (by Bon Coeur x Londonderry), bred by Mr Kutzer and owned by Drube & Brunckhorst. The Hanoverian stallion scored a total of 8.34 points with 7.5 for walk 8.5 for trot, 8.7 for canter and 8.5 for rideability and willingness to perform.

The KWPN bred Most Wanted Nero (by Morricone x Donnerball) got the third best score of 8.33. Owned by Gestüt von Bellin, the black stallion got 8 for walk and canter, 8.2 for trot, 8.8 for rideabiity and 8.5 for willigness to perform.

This shortened sport test also welcomed the Hanoverian premium stallion Energy (by Escamillo x De Niro), which Austrian gun mogul Gaston Glock bought at the auction for 700,000 euro as future ride for either Edward Gal or Hans Peter Minderhoud. Currently ridden by their assistant rider, Belgian Under 25 team rider Nico Nyssen, the black Energy scored a total of 7.86 with 7.5 for walk, 7.3 for trot 8.5 for canter, and 8 for rideability and willingness to perform. The black felt totally at ease in Warendorf because as he was being led out of the arena in hand, he decided to lie down for a roll in full tack.