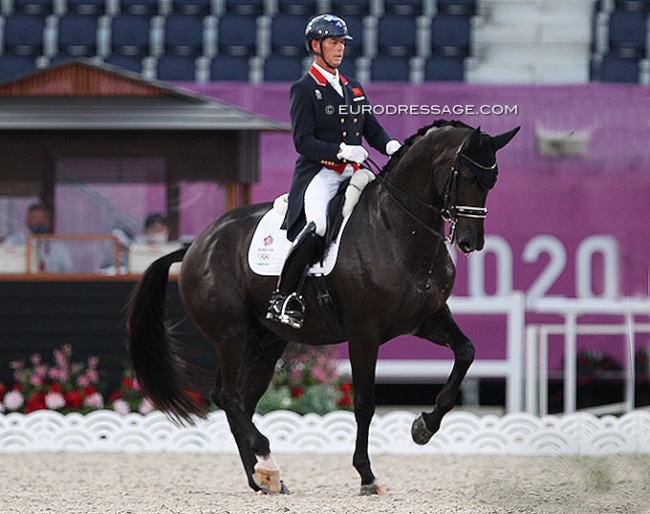 Just weeks after announcing that Carl Hester prefers to compete nationally this year in support on domestic show organisations, Horse & Hound reported that Carl's team horse has been injured and needs time off.

En Vogue is a 13-year old Dutch warmblood gelding by Jazz out of Nicarla (by Contango). He is bred by A. van de Goor and owned by a syndicate including Charlotte Dujardin (50%), Lady Anne Evans (30%), Sandra Biddlecombe (10%) and Carl Hester (10%).

Produced to Grand Prix level by Charlotte Dujardin, En Vogue was given to Carl to ride in 2020 as a Tokyo Olympic hopeful. Hester has sold his 2019 European Championship team ride Hawtins' Delicato to Fiona Bigwood and would continue his career with En Vogue.

Making their CDI debut at Keysoe in October 2020, Carl and the dark bay gelding straight away posted 76.500% in the Grand Prix. Their Olympic team selection campaign started in Hagen in April 2021 with a 74.304%, followed by 77.500% at the CDI Wellington Heckfield a month later.

Six weeks later Carl rode En Vogue on the British team at the 2021 European Championships in Hagen, where Great Britain earned team silver. In the Grand Prix Special the pair produced a stellar ride in which Hester showed off with true dressage is really about. Their 77.310% and sixth place were undervalued as that was a test that should have put them on the podium. In the freestyle they were 13th with 78.375%.

Herning on the Menu

Carl and En Vogue started the 2022 show year at Keysoe with team selection for the 2022 World Championships in Herning on the menu. He won the Grand Prix with 73.696% and the Special with 69.575%, the pair's first international score below 70%.

Hester had scheduled to compete En Vogue at the national show in Hickstead this week, but withdrew because of injury.

"He got an injury at the end of last week so needs some time off,” Carl told Horse & Hound. “It’s particularly gutting at this time of year when I wanted to get going, but I don’t want to rush him into work. It is just unfortunate timing.”

Hester did not disclose if En Vogue will be fit again on time to put up team trials later in June/July.

Carl's string of students, including Gareth Hughes, Fiona Bigwood, and Charlotte Dujardin, will be competing at Hickstead this week in preparation of the CDIO Compiegne on 19 - 22 May, where the trio is pursuing team selection scores for Herning.