Behind and in Front of the Vertical – Measuring the Change 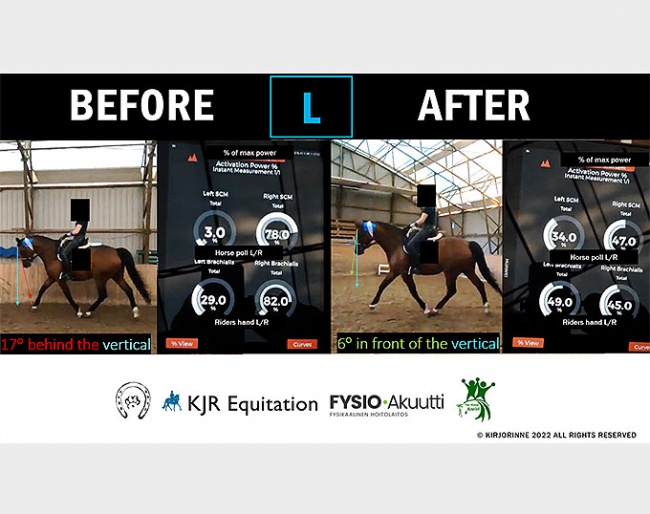 Good training respects the horse's body and mind, it’s a roadmap to progressively develop any horse from basics up to any level suitable for this individual.

Dressage training is logical when the training at home supports the goal. For dressage the goal is defined in FEI Dressage Rules. The rules highlight the welfare of the horse, and the correct frame is also very clearly defined – the horse should remain in front of the vertical or become close to the vertical. Why are so many riders then trying to achieve something else in their training at home?

For some horses it’s easy to move behind the vertical, but even if this feels easy, it has surprisingly negative effects on the muscle activity and therefore this habit should be corrected at its early phase. The body is capable to adapt even to the harmful postures which may lead to non-healthy loading of the body during a longer period of time. Some critics would say the poll position doesn’t matter that much, but there is a measurable difference that has a clear impact on the horses movement.

Where the need for testing came from

For many years I had noticed that riders describe their horses feeling good, round, and relaxed when the horse becomes just a little bit behind the vertical. This happens for riders in many different disciplines and levels and traditionally this frame is not correct. From an anatomical point of view, it is not optimal either. From a training point of view, it is a very common goal and result of training. Even if the riders seemed quite happy with this “nice and round” feeling, I always asked them to open the frame to see how this correction affects the horse’s movement. After doing this, the riders said the horse felt more uphill, active, and elastic, and they often described that the back of the horse felt “connected”. This correction was always done with an upward and forward directed rein aid, followed by a leg aid. This is commonly used in classical training. It helps the horse to open the frame and movement to flow through the body in a good balance. To understand better what I was seeing, I started to use my muscle activity measurement device in my training a few years ago. In my early measurements, I had noticed that there is a clear connection between the frame and muscle activity of the poll area.

Another important thing that disturbed me was that horses that moved slightly behind the vertical could be very tense in the poll, while their experienced riders said they felt the horse was quite relaxed. Every time the frame was opened, the poll actually got relaxed. To understand this better, we decided to have a closer look at this with a team of experts – trainer, physiotherapists, animal physiotherapists and a veterinarian.

We tested a group of 11 volunteer riders and their own horses to look at the symmetry, muscle activity and rein pressure. We followed them first in walk, trot, and canter on a circle in both directions. After that we tested different corrections with different riders. We picked three different horses to compare the effects of the frame when the horse was moving behind and in front of the vertical. The horses were adult horses, advanced in their own discipline - two competing in dressage and one in showjumping.

The technical equipment and placement of sensors

We used equipment that we use in our daily work to measure the effects of training. The sEMG sensors that measure superficial muscle activity are easily attached on the skin which is comfortable and almost unnoticeable for the horse or the rider. The sEMG sensors measure the electrical signals that are produced by a muscle during its function, and it was possible to see the changes in muscle activity in real time which is very useful in field use. We placed sEMG sensors on horses poll area, above atlas joint (on m. Brachiocephalicus). The placement of sensors was checked before the ride by animal physiotherapists.

We also placed sEMG sensors on the rider. We chose the lateral side of forearm (m. Brachioradialis) because this area typically activates when the rider is using rein aids. The placement of sensors was checked before the ride by physiotherapists.

We were also following rein pressure to confirm that the rider wasn't using any force that would affect the horse’s position.

The riding technique is simple and classically well known. Gentle, quick and precise, forward-upward lifting rein aid, that encourages the horse to open the frame. After the lifting rein, a leg aid can be used if needed. After the correction the rider’s hand returns to its normal position. The test was done in trot on a circle in both directions. We asked the riders to open the frame to the position that is defined in the FEI dressage rules. The technique was shown to the riders before testing the change of frame, and they were using it approximately 10 times per direction.

We could see that before the correction the horses were moving behind the vertical, with a light rein contact. There were some differences in the muscle activity of the rider’s hand before the correction. When horses were moving behind the vertical, even with a very light contact, they were showing significant muscle tension in the upper neck above the atlas joint (C1).  We could see even 90-99% activation values of the specific muscles maximum activation. This kind of maximal tension would absolutely affect the movement strategy and biomechanics of the horse. With all horses it was clear that they were not actively asked to move behind the vertical because of rein aids during this test, yet the horses were routinely seeking this head and neck position that was 16-28 degrees behind the vertical.

When the rider asked the horse to open the frame in front of vertical, the horse’s poll muscle activity dropped significantly. Any activation up to 25-45% is a rather normal variation when the frame is correct, lower values near 20% are preferable. After correction, the difference in the muscle activity symmetry of the rider’s hands  got also smaller. We could see that the horse’s movement seemed to be directed more upward forward and it got easier to ask the horse to move forward from the rider’s leg aids. When the horse was suggesting the closed frame again, the correction was repeated. We could see that the result was similar each time the frame was opened – the poll got relaxed. To get permanent results, the value of this correction and concept of moving in front of vertical in different neck heights must be understood and used in the daily training. Further research is needed to get larger groups of horses and riders tested.

The classical seat is an important foundation for the good and sensitive use of the hand, which is part of the rider’s seat. The hand must remain as relaxed as possible so that the rider is able to use the fine motor skills properly. The muscles of the hand and the arm are activated when rider is communicating with the horse. It is important that the rider is using the hand precisely and is releasing the aids as quickly as possible. Any tension in the body is forwarded into the hand, and tense hands block the rider’s seat. Precise and soft rein contact enables sophisticated communication, and gives valuable information of the horse’s balance to the rider. A balanced horse doesn't take support from the rider’s hand and holds up his body with ease.

"When the horse is moving behind the vertical line, tension on the area of poll and neck is created. Equine poll and neck tension have a direct influence on  the biomechanics of the vertebral column and both front and hind legs. For example, tension in the area of M. brachiocephalicus upper insertion influences protraction of the front leg and creates shorter and higher stride length resulting in increased injury risk due to overuse. Soft and relaxed muscles in the poll and neck area makes breathing easier due to open air ways, neck and front leg movement more elastic , increasing bone and joint health," Finnish veterinarian Jaana Tainio commented.

Moving behind the vertical seems to create a high muscle tone at the sensitive upper neck and poll area, even when the horse seems relaxed to the rider. A high muscle tone and a static movement strategy challenges the biomechanics, balance and proprioception of the movement and can lead to compensations and increased loading. The frame in front of the vertical, as described in FEI dressage rules and when correctly used, allows the horse to use the body in a way that is beneficial for a healthy, natural and balanced movement. This supports the goal, which is a happy equine athlete.

Related Links
Why So Round? Open the Frame!
Noseband and Poll Pressures Underneath Bitless Bridles Measured
The Dilemma of Pads and Nosebands