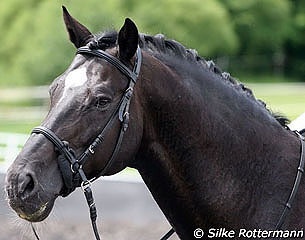 Vikki Fowler, a British Veterinary equine dentist, pointed out a fascinating paper on the pressures exerted by bitless bridles compared to a cavesson noseband.

"I am neither pro nor against bitless. Both bitted and bitless have the potential to cause damage in the wrong hands, and both can be gentle and comfortable in the right hands," said Fowler.

Noseband and poll pressures underneath bitted and bitless bridles and the effects on equine locomotion.

-- by Nina Robinson and Tracy L.Bye.

There is an increasing trend towards the use of bitless bridles within the equine industry, but a lack of quantitative literature on their effects. This study aimed to measure the pressures underneath the noseband and headpiece of two designs of bitless bridle in comparison to a bitted snaffle bridle, and to measure trot kinematics in all three bridles.

Five horses were each ridden in three different bridles, a snaffle bridle with cavesson noseband (SN), a side pull bitless bridle (SP), and a cross under bitless bridle (CU), over three days in a Latin square design.

The SP bridle showed a significantly higher average noseband pressure (4.42 ± 1.52 N/cm2; median ± IQR) than the SN (2.67 ± 1.00 N/cm2) with the CU sitting between the two (2.96 ± 1.00 N/cm2). The pressures exerted by the SP design could be capable of causing tissue damage if sustained for long periods of time. The pressure increase is likely due to the attachment of the reins directly to the noseband in the SP bridle, meaning rein tension is concentrated on the frontal nasal plane, rather than being distributed more evenly across the head.

There was no significant difference in headpiece pressures between the bridles.

In the CU bridle a significant reduction in carpal flexion (98.10 ± 7.98o) and a more extended head and neck angle (112.04 ± 3.01o) were seen compared to the SN (93.58 ± 7.32o and 105.94 ± 6.98o respectively). These changes are associated with an extended back posture and reduced performance, and may be a result of avoidance behaviors arising from pressures underneath the jaw due to this bridle design.

Removal of the bit from the horse's mouth means that rein tension forces are distributed to other facial structures.  This study demonstrates that these forces are sufficiently high to possibly have detrimental effects.

The design and use of bitless bridles should be carefully considered in light of this finding.

Related Links
Rein Tension with Bitless Bridles Compared to Single-Jointed Snaffle Bits
A Bit is Only as Harsh as the Hands that Hold It
Bitless or Not, It’s About Having the Choice
Swallowing Frequency in Cantering Horses: Effects of Different Bits and Bridles
From the Horse’s Mouth... Actually the Horse’s Tongue