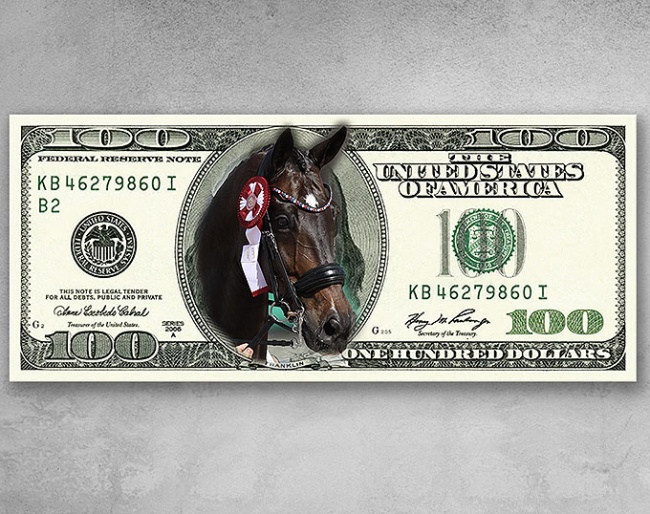 By building an estimate of the Global Dressage Economy (GDE) the community can develop arguments to use when negotiating with governments and sponsors. But how can we get a reasonable estimate?

I have started from the premise that the most important component to estimate is the national competitor. They clearly make up the bulk of dressage riders, and some fraction of what they spend actually feeds up (or down, depending on your perspective) the chain as they board their horses with higher level riders, or receive their training from them, or buy their horses from them.  To avoid double counting I try to assess mostly the costs of this base of riders who compete mostly on a national basis. I know there are also many riding club members who do not own their own horses and whose outlays are less than this middle of the field national rider, but in a way they also feed into this middle layer, who use some of that income to finance their own riding and competition.

So, over the past year I have been in contact with various representatives of national federations and knowledgeable dressage personalities to estimate the number of such riders and the spending envelopes for the various components of a dressage rider’s budget. I want to express special thanks to Cesar Torrente who put in a lot of time to compile for me the numbers for Central and South America, though he is of course not responsible for any mistakes I make in interpreting those numbers.

So, I put this out there to encourage thought and criticism, I doubt I have everything (perhaps anything) exactly right, but I think it is important to the sport to build this picture so we can leverage this knowledge and plan effectively.

How many people ride Dressage around the world?

Approximately 3,000 riders competed at FEI level Dressage in 2019, clearly 2020 would not be a good year to study! When I say FEI levels, I include all test and age groups, from Pony to Grand Prix as well as Para riders.

When trying to determine the number of national riders I have tried to set a level which is a bit below the FEI Junior test level, and up. But this is clearly very difficult to pin down precisely, each nation classifies their lower test levels differently. I also realize that many riders do not frequently compete at any level – or only in non-affiliated competitions - though nevertheless they may classify themselves as dressage riders, but this group is also too hard to estimate. It is probably also the case that many of the riders that take national competition licenses actually compete only once or twice in the year. But, anyway, these are my estimates which would suggest that about 1 in 60 dressage competitors, as defined above, compete internationally:

Table 1 The estimates for Europe are fairly well established, the majority come from the major dressage nations who have provided these numbers. I estimate about a 12% uncertainty in the total of ~170k dressage riders worldwide 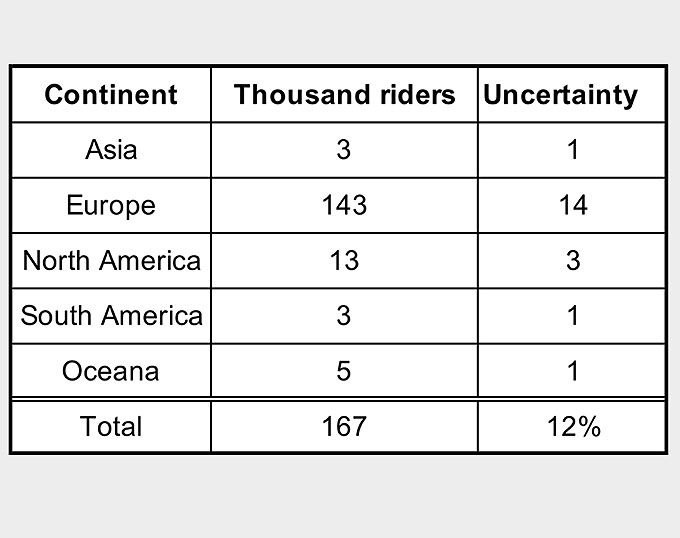 How much does it cost to keep a competition level dressage horse?

Costs of keeping and competing a horse clearly vary substantially from region to region, but for this global estimate, given that more than 80% of the riders are based in Europe, and the majority of them in Western Europe I have used estimates based on costs I know about.

Since I live in the hope that there are in fact more economical places to live than my home by Geneva, I also launched a survey to get a better perspective on the variation of costs. From that survey I have compared the median cost that respondents submitted, with my own experience. I use median rather than average as the average can typically be dominated by a few very high examples. I have also worked on the assumption that each rider has one horse, this is of course an underestimate in many cases, indeed the median in my survey was 2, but I also suspect that the survey respondents were more representative of higher-level competitors.  Given that the top riders usually have more than one horse, this will cause my estimate to most likely be an under-estimate.

Table 2 Estimated costs of keeping and competing a dressage horse 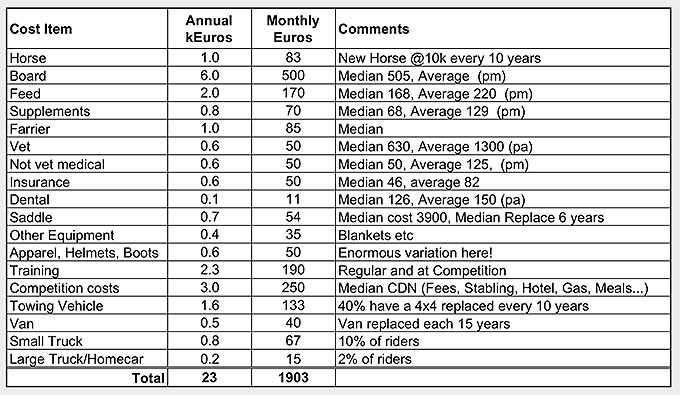 For the vehicles I have taken account of purchase costs, replacement intervals and the percentage of rider who use them.  (pa means per annum, pm per month) These are of course only estimates, and the reader can play with the numbers; we should not assume that they are better known than plus or minus 30%.

Putting this together we can estimate the GDE at 3.8 billion Euros with an uncertainty of about 1 Billion Euros, so probably between 3 and 5 Billion Euros per year. We can also extract other interesting details, for example annually Dressage riders spend 267M Euros on 4x4 vehicles, which might be of interest to Toyota, Land Rover and BMW! The GDE per item is summarized in Table 3, clearly there are significant uncertainties for each item, you are very welcome to estimate them yourselves and I feel these are important issues for the community, but the general picture is of a strong dressage economy!

Table 3 Global Dressage Economy. Each figure has about a 30% uncertainty 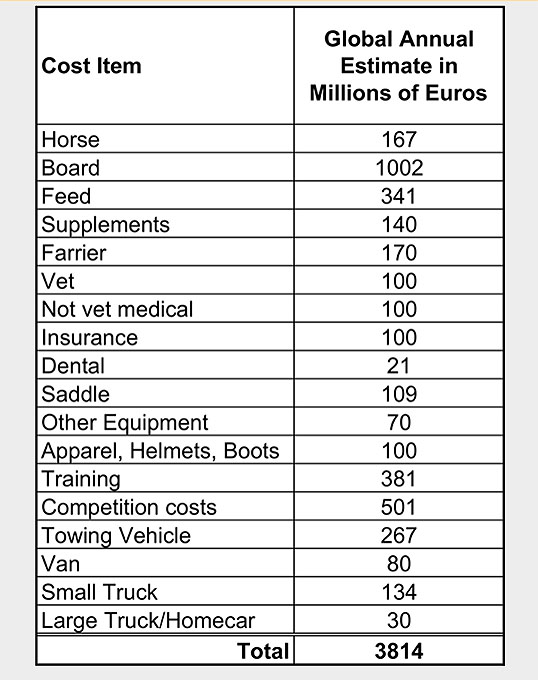 More Articles and Columns by David Stickland on Eurodressage