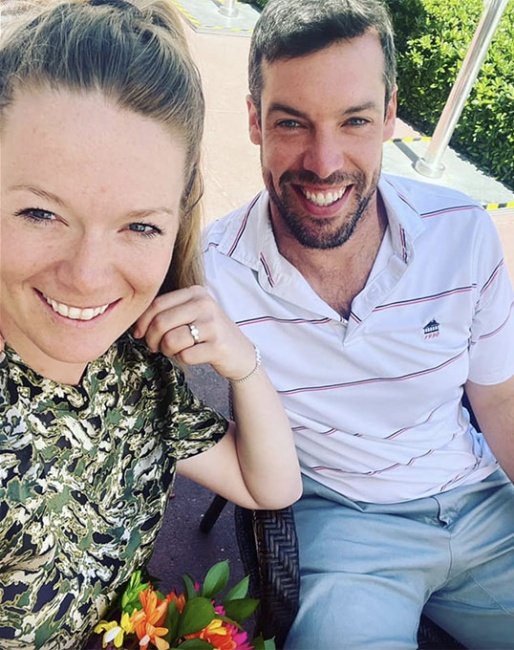 Canadian Olympian Lindsay Kellock got engaged to her partner of one a half years, Drew Duckworth. He proposed to her on South Beach, Miami, on 7 February 2022 and it came "as a total surprise." The couple met through close friends at Millstone Farm in Wilton, CT, where Drew manages Eliane Van Reesema's farming operation.  "My good friends Eliane, Alexandra Reid and her husband Jose Naranjo were the matchmakers," Kellock told Eurodressage. "He is so supportive, loving, generous, kind and caring man and I’m so excited to take on this life together." There are no immediate wedding plans yet, but the couple hopes to have a ceremony or reception in the autumn of 2022.

Horses.nl reported that quartet Ilona de Bruyn, Coby de Jong, Hidde Scheerman and Philip Hermans has purchased the KWPN licensed stallion High Five U.S. (by Charmeur x Negro x Vincent). Bred by Jan and Christiane de Feijter, the dark bay was the price highlight of the Borculo foal auction in 2012 where he sold for 40,000 euro to Paul Schockemohle and Joop van Uytert. He was trained by Gerrel Vink and Diederik van Silfhout but never competed due to an injury. In 2021 he was leased to Hans and Corneli Goedhart.

Spanish team rider Borja Carrascosa and his long-time partner in life and business, German Alexander Brenninkmeijer, are getting married! On 5 March 2022, Brenninkmeijer proposed to Carrascosa after having been a couple for 10 years. "My best friend, better half, love of my life and partner in crime said yes to my proposal of finally tying the knot and spending the rest of our lives together," Alexander rejoiced. "Can‘t describe in words how amazing it feels to have the best fiancé in the world! Always by my side in good and not so good times. And probably the only person on the planet that can deal with my grumpy mood for so long."

Check out these golden oldies Wolke Sieben and Geisha. Both mares were key horses for the Rothenberger sisters, Sanneke and Semmieke, and are now enjoying their retirement from sport as broodmares.

Barbara Schnell snapped this photo of the two ladies enjoying some hay time together.

Swedish Grand Prix rider Johanna Due Boje gave birth to a baby girl, Victoria, on 27 February 2022. "And just like that nothing else matters," Due Boje announced. "Welcome to the world Victoria." Father of the baby is Johanna's fiancé Alvin Mabrouk.

French professional dressage rider Renaud Ramadier has made the move to independence. Dressprod reported that after 13 years working for Elevage Massa, the 36-year old rider has begun his own business on 1 March 2022 at Notre Dame stables in Bagnols-en-Forêt, France. The yard is owned by the Tichadou family, who also owned the horse Accroche Cœur de Massa. Ramadier and his partner Joanna have 10 horses in training. His top ride at the moment is 11-year old Grand Prix hope Bonheur de Massa.