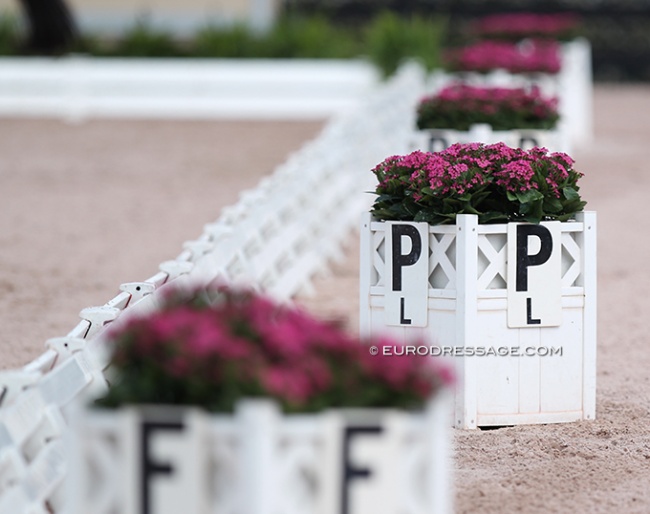 British dressage rider and trainer Adam Kemp featured as guest speaker at the 2020 International Eventing Forum and commented on the flatwork section alongside Barrel racer Nicole Aichele. Kemp, whose career started at the Talland School of Equitation under Molly Sivewright and Pammy Hutton. His career highlight horse was Crown Marcasite, with whom he rode a world cup qualifier in 1994. He trained with Georg, Monika and Inge Theodorescu, Henk Van Bergen and Kyra Kykland. As of 2004 Kemp has been focused on teaching.

Here are "11 Kemp Quips" on dressage and horsemanship which he shared at the the International Eventing Forum 2020:

1) "It takes 7 years to become a rocket scientist and I have been trying to be a horseman for over 40 years and I am still not there yet. Horsemanship is difficult because you are dealing with an animal that has its own brain. Understanding horses is science, understanding an individual horse is for me, horsemanship."

‘Riding a Grand Prix test – the difference between 86% and 46% is basic riding skills applied at the right time on a well-trained horse to produce results.’

4) ‘Everyone thinks they have the most intelligent horse in the world to match their kid. What they have is 600kg of dumb animal like we have all got. You might have one who is more intelligent than another horse, but it's still a horse. A horse is academically stupid but they are reactively bright. So, you need to capitalise on what they can do, which is react. What they cannot do is problem solve because they are herd animals. The herd makes a decision. They cannot help being flighty or spooky as you bought a flight animal. If you cannot get a flight animal to go forward then something is wrong as that is what they do.’

5) ‘The horseman will be told by the horse how to ride him. The non-horseman will be told by social media how to ride him. Jumping is easier because the horse can see the jump. A dressage rider's job is harder because they cannot see the size of a circle or how steep a half pass is until it is too late. Jumping has a slight advantage as the horse can see the jump and as long as the rider enables the horse to do its job and think for itself then it's going to be ok. A horse cannot do a canter pirouette on its own because it doesn’t know how small the circle needs to be. Your job is to say to the horse there is a problem coming and this is the solution.’

6) ‘If a horse was intellectually our equal, you would not be up there on top, we would not get a foot through the door. Why would they do this? It's utterly pointless, 25 minutes cantering around to end up back where you started! We are good at saying to ourselves 'oh but they really love it!. Do they? They like to please us.’

‘Horses are not unpredictable, they are just unpredicted.’

‘If I could invent a new sport I would call it horse influencing. At a certain point in a rider’s career we could upgrade it to dressage.’

7) ‘The animal you are educating is very simple. That is not easy to ride. Your pupils are always looking for the reason they cannot do it. They have been to the vet, the physio, they have the new saddle and the horse is just as confused. I say to them now is that the reason you are struggling is because it's difficult. They might have physical issues; every horse has physical issues and lameness, but either they are incapable and lame so stop trying or accept what he is and make him better at it. But you cannot do that if you cannot ride.’

‘That’s the message I want to give out, you are not riding well enough because if you were then you would get the same score as Charlotte.’

9) ‘This horse has just started competing at PSG, but as you see when he gets tense he misses the odd change and makes mistakes, we just need to ride better, or have his back X rayed. I think riding better will be cheaper.’

‘Every time I am on a horse, I am educating and trying to improve our partnership.’ Adam added that he sees far too often horses hacking and not paying attention on the aids. The next day they are asked to concentrate. The thought process of every time you ride the horse it should be on duty is the right one.

10) ‘An awful lot of people we teach are not capable of educating a horse because they have not actually learnt how to ride one. Until you can do the right thing, at the right time, in the right language then you cannot be an educator.’

How to Improve Riders

Pammy Hutton asked if Adam could give his view on how to improve riders and what he is going to do?

11) ‘I would like people to remember what riding means and what that is. I have so many riders who say I want it to feel like this, or that, or the other. I tell them that’s not what riding a horse feels like. It's like saying I want to dance but I don’t want to move. Riding a horse doesn’t feel how you think it does. The first time you have a good medium change, they don’t like it. The first time they do a correct flying change, they like the one which is late behind and slips through because it feels nice. I tell them nice isn’t one of the scales of training.'

"Riding a horse – the front-end bites, the back-end kicks and the middle --  is uncomfortable. That is where you start. Teaching a rider what it means and how to influence is important. Teaching what is correct and incorrect is difficult because we keep changing what we think of as correct. I learnt to influence horses on the worst horses possible because without intervention it would have ended up in tears."

"Teaching riders that dressage and riding are not the same thing. Dressage is defined as a highly skilled variation of horse riding and that is not what I see all day in the arena. It is largely people that are not brave enough to ride, so they do dressage instead and we have spent 20 years developing that into a sport that we can no longer actually tolerate. We have to find a way of getting to people riding correctly before they qualify for this championship and that championship and thinking they have a right to ride at the Nationals. We have told too many people they have a right to ride at the National championships and instead we should be telling them that you need to ride better and when they can do that they will get to the Nationals.’