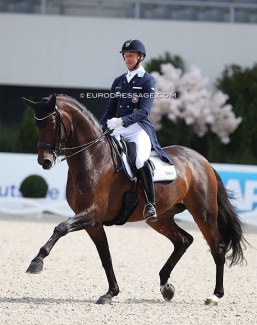 Fiontini is an 11-year old Danish warmblood mare by Fassbinder x Romanov. She is bred by Hanne Lund and Henrik Hansen.

In 2016 Swedish young rider Beata Soderberg bought the then 6-year old mare as her future horse, but Severo Jurado Lopez retained the ride at the time.  Jurado and Fiontini completed a hattrick and won the 2017 World Young Horse Championships in Ermelo.

In March 2018 Beata Soderberg sold Fiontini back to Andreas Helgtrand who partnered with investor Martin Julius Klejs Jensen of Stutteri EVO to re-acquire the horse.   Soderberg received Heuberger TSF (Anabel Balkenhol) in the swap and switched to Patrik Kittel as her new trainer.

Without making a lay-over at small tour level in 2018, Jurado and Fiontini made their national Grand Prix debut in 2019. The mare went lame in the spring of that year, though, and missed out on team selection for the 2019 European Championships in Rotterdam. They successfully returned to the arena in October 2019 and March 2020. They were short listed for Spanish Olympic team selection, but in April 2020 Jurado decided to leave Helgstrand and lost the ride on Fiontini.

Helgstrand took over the ride as he had set his mind to qualifying on the Danish team for the Tokyo Olympics.  Their international debut was in October 2020 at the CDI Aarhus, but in 2021 the scored between 71 and 72% at the CDI Hagen and  Compiegne and stayed short of Danish Olympic tea selection.

Helgstrand sent Fiontini to Kittel to be sold.

With Kittel, Fiontini produced top results at the CDI Donaueschingen, CDI Grote Brogel and rode on the Swedish team at the CDIO Aachen in September, scoring 76.26% in the Grand Prix.

Buffini made her international start on Guenter Seidel's former ride Sundayboy (by Kennedy) in 2013. In 2014 she became the 2014 U.S. Young Riders Champion and competed him at the 2014 North American Young Riders Championships in Lexington, finishing second in the team test but withdrawing from the rest of the competition due to an injury. They were the 2016 U.S. Under 25 Champions.

This is not the first time that Buffini has purchased a horse from Patrik Kittel's stable. Her Grand Prix schoolmaster Wilton was also sourced in this barn in the spring of 2015.

The bay proved to be tricky to ride and became a horse that posed a lot of challenges to her in the arena, from which she learnt much. The pair rode some CDI Under 25 Grand Prix tests and did their last international was in February 2020.

In the autumn of 2020 the Buffini's bought established GP horse Divinia La Douce FRH (by Don Frederico x A Jungle Prince) at Klaus Balkenhol's, which she began campaigning immediately in November 2020 at the CDI Thermal to promising results. In 2021 they competed in Wellington and Temecula and travelled to Europe for a tour to compete in Achleiten and Rotterdam. They were members of the US team at the CDIO  Aachen and finished fourth in the Special with 71.787%.

Fiontini for Herning and Paris

" It only took me a few seconds to fall in love with her when I rode her the first time. She is a very special horse, but also incredibly sweet. She has a big heart, which is something that means a lot to me when I look for a horse," said Buffini.

Anna is planning her first show with Fiontini in 2022 in Wellington.

Anna herself is planning for the first show in the new year.

"I look forward to getting her home to the US and getting to know her better. If I feel like we are ready, it is my plan to make our debut in Wellington next year, Anna says.