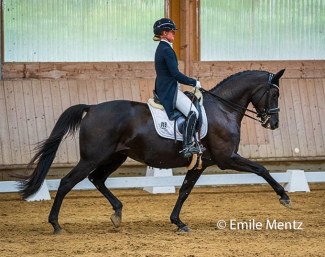 The young riding horses in the 2021 Trakehner auction of sport horses and foals sold for modest prices. Foal, on the other hand, went like hot cakes and the price highlight was an in utero foal.

Twelve foals and six riding horses were presented at auction on Friday 15 October 2021. The auction was a hybrid format with online, phone and live bidding.

The top selling lot was an in utero foal by Imperio out of a SPS Dallenia (by Millennium x Handruk), who is closely related to Olympic champion Dalera BB: the granddam of the embryo is the dam of Dalera. For 60,000 euro this foal sold to a "stud near Munich".  Although the buyer's name is not disclosed, it would come as no surprise if Jessica von Bredow-Werndl's yard Aubenhausen near Munich or her sponsor Beatrice Burchler-Keller were the buyers.

Fahenna (by Integer) became the top selling foal in the collection, selling for 21,000 euro to Schleswig-Holstein.

The six sport horses sold for for an average price of 27,416 euro.

The most expensive riding horse was the 4-year old Donaunacht (by Helium x Redecker) which found a new owner for 31,500 euro.

All horses will stay in Germany