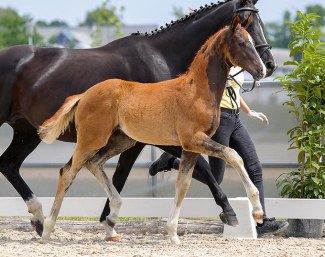 Right at the start of the two-part 2021 Verden Online Auction of Foals in Aigist, the colt Benz with head number one achieved the top price. The virtual auction hammer fell for 61,500 euro for the Bonds x Spörcken son.

The bidding for the Bonds x Spörcken son Benz (breeder and exhibitor: Friedrich Wilhelm Gerke) lasted exactly half an hour. 15 bidders participated with a total of 77 bids. A customer from the Rhine-Main area, who had already bought an offspring by Bonds in this way twelve months ago, prevailed. Benz' dam, Hann.Pr.St. Symphathe, is herself a former auction foal and four years ago presented her first son, Frankie Lee by Franziskus, in the Verden auction.

Two other colts found a new owner for over 50,000 euro. The Franziskus x Sorento son Franco Nero III (breeder and exhibitor: Stefan Hermann) sold for  50,500 euro to a breeder from the USA.

Vigodance (by Viva Gold x Florencio), bred by Dieter Erdmann) sold to Ukraine for 55,000 euro. He will be accompanied by the Bon Vivaldi  x Sir Donnerhall daughter Bonita, who was sold for 30,000 euro.

All in all, especially the fillies made a brilliant impression. This was rewarded with good prices. 33,000 euro were paid for the For Austria x De Niro-daughter For Lady. Briosa (by Bon Courage x Fürst Nymphenburg) will move to Austria for 30,000 euro.

And so it was a filly with a very up-to-date pedigree that led the field of the jumping foals. Chacco's Red Girl (by Chacco-Blue x Kannan), born via embryo transfer while her dam is successful in show jumping competitions at the same time, sold for 28,000 euro and will spend the coming years in Brandenburg.

The 104 representatives of the 2021 vintage achieved an average price of 11,428 euro. This is an increase of about 1,000 euro compared to the previous year. 42 foals were bought by international customers. The buyers came not only from Europe, but also from Argentina, Mexico and the USA.