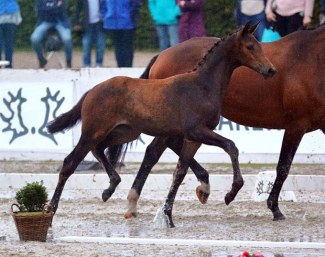 Kinshasa became a record setting price highlight in the foal auction held at the 2021 Trakehner Championships in Munster-Handorf.

A Trakehner enthusiast from Gestüt Gut Söl’ring on the German island of Sylt paid 85,000 euro for the filly Kinshasa. The bay is by Millennium out of Kia Ora (by the CCI 4* successful Glucksruf). She is bred by Ilonka Danowski and Frank Martens-Bruns. Kia Ora is out of Ingrid Klimke's former ride Kira K.

The Championships were rained out but that did not dampen the spirits of the buyers who achieved an average sales price of 15,024 euro for the 21 foals that were sold.

Two foals sold for more than 20,000 euro. Ten fetched 10,000 euro or more. It was a hybrid auction with online and live bidding.

The second most expensive foal was Kanté (by Blanc Pain x Freudenfest). Bred by Sabine Langels, this foal sold for 25,000 euro to Nicole Derlin.