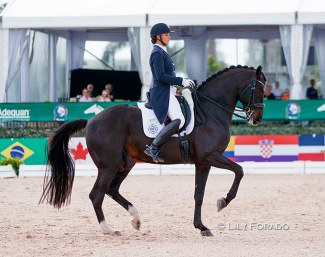 U.S. WEG team rider Adrienne Lyle waited until the last competition of the 2021 Global Dressage Festival to bring her best horse in the barn back into the show to score a personal best of 80.065%

The final week of competition in Wellington, Florida, continued on Thursday, April 1, with the 3* and 4* Grand Prix classes.

In the 4* Grand Prix it was Adrienne Lyle on Betsy Juliano's 2007 Hanoverian stallion Salvino (by Sandro Hit x Donnerhall) that concluded the day with the highest honours highlighting the stallion’s return to competition for the first time in 13 months.

While the panel of judges was unanimous in placing the pair first, their individual marks ranged from 78% on the long side (Ringmark, Torrente) to 80% from both U.S. judges (Osinski, Weatherwax) and even a whopping 83.26% from Wellington regular visiting judge, Stephan Clarke (GBR).

“It felt amazing,” began Lyle. “He just never ceases to amaze me with his heart; that horse has a bigger heart than any animal on this planet I think. He’s just proven time and time again that he’ll be there when I need him to be there, if we listen to him and don’t overdo it. We waited to come out last year until later in the season and it worked, so we decided to wait again this year, and so far it’s off to a good start. Hopefully we can put in a few more performances like that leading up to the summer.”

“He felt really fit and fresh,” explained Lyle, "and was even squealing a little going around the outside of the ring like he was really fired up. I like him to be in that spot where he’s really excited to go in there.”

She continued, “I actually started crying after the ride, which I hardly ever do. He didn’t put a foot out of place, and he’s so amazing. I could tell he was excited and fresh. We haven’t been in there in over a year, and when he went down centerline, he focused and knew it was time to put everything aside. He really knows how to be there for you, and not many horses are like that. You don’t get to sit on many of those in a lifetime.”

Lyle has already had a successful season with her other grand prix mount, Harmony’s Duval, and now plans to campaign Salvino for a chance to represent the USA at the Tokyo Olympics this summer. Her 80% is the highest Grand Prix score a U.S. rider has posted this entire Florida winter season.

“I am really lucky because I have two grand prix horses,” she stated, “so I myself don’t feel rusty even with his time away… Debbie (McDonald, US team trainer) and Betsy and I are all on the same page in the sense that he’s proven that less is more, and you have to stick to your gut. It’s hard sometimes when you’re sitting at home, you’re still six months away from the show, and you want to be working on things, but you have to tell yourself no, just keep him fit and happy and he’ll be there when you go to the ring. So far it’s proven true.”

Once AGDF concludes, the pair, now based year-round in Wellington, will head to Tryon International Equestrian Center in North Carolina to compete in the newly upgraded CDI4*.

“We’re planning on going to Tryon,” she remarked, “and then if that goes well, hopefully we’ll be named to the shortlist for the selection trials. For us, because those are [in Wellington], not much will change for him and that’s nice. It will be a good test because it will be similar heat to Tokyo. If we can have that advantage over some of the other European countries, I think we’re smart to utilize that.”

The pair, who has initially focused on the World Cup CDI-W shows, still need the two required Grand Prix Special scores in order to make a chance to be short-listed for the U.S. Olympic team.

Canada’s Naima Moreira Laliberte on Statesman, a 2007 Hanoverian stallion by Sandro Hit, rode to a personal best score of 72.500%.

The Grand Prix for Special 3* was topped by Susan Dutta (USA) on Figeac DC, Tim and Susan Dutta’s 2009 Oldenburg gelding by Fackeltanz x Diamond Hit, with a 70.630%.

Figeac made his international show debut as a young horse at the 2015 CDI Perl in Germany under Christoph Koschel, who rode the liver chestnut for the Dutta's. In 2017 Susan premiered him in the small tour in Wellington. In 2019 they moved up to Grand Prix level. The pair trains with Adrienne Lyle.

Second place was awarded to Jessica Howington (USA) on her own 2007 KWPN mare, Cavalia, by Sir Donnerhall I, riding to a score of 68.522%.

Third place was captured by another USA rider, Alice Tarjan, aboard her own 2010 Hanoverian Candescent (by Christ), receiving a 67.457%. The mare is the U.S. Developing Grand Prix horse champion and this was her third CDI in the classic Grand Prix tour since 2020.

Kim Makes it a Double

In the Intermediaire I 3*, Dong Seon Kim (KOR) rode his own Lord Nunes, a 2012 Rhinelander stallion by Lord Loxley I, to another successful day of competition after coming off of a win in yesterday’s Prix St. Georges . The pair earned a 69.382% to win the class.