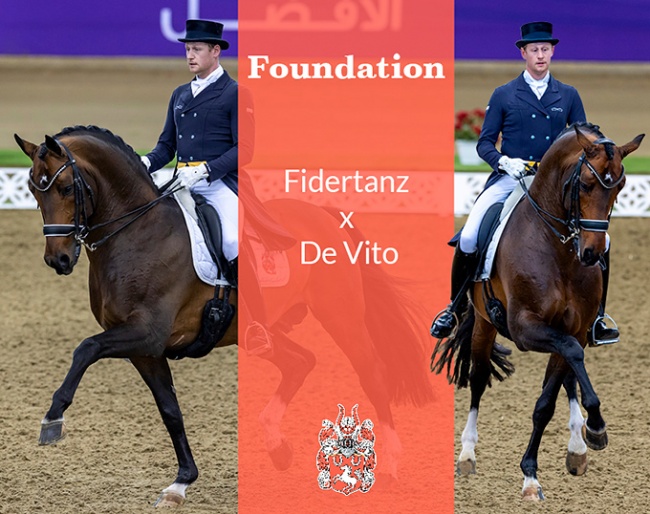 His breeding value increased sharply in his very first breeding year already. Regarding movements, he is one of the most influential stallions in Germany and guarantees three equally great paces to be inherited by his offsprings: Foundation has proven himself to be a magnificent sire and is a great successful stallion himself on the international dressage stage.

A stallion with a special charisma or ‘heart-warming and dreamy’, as his groom describes him. Still, he has an incredible positive attitude and strong willingness to perform his best every time he comes into the arena.

He was the winner of the Oldenburg main premium in 2012. In autumn 2013 Matthias Alexander Rath presented the stallion for the first time at a show and was victorious in L-level dressage tests twice. He then took his time with him and continued to prepare him for the higher classes and presented him in his first M ** level dressage tests in 2015.

Just to make everyone excited about the future that was lying ahead of this extraordinary stallion, Foundation was in the fast lane right from the start. The upcoming years were similarly linear, from the final of the NÜRNBERGER BURG-POKAL as an eight-year old, to the final of the Louisdor-Price as a nine-year old right up to the Grand Prix sport.

Meanwhile, he can look back on placings in international Grand Prix competitions with Matthias Alexander Rath in Wiesbaden (GER), Le Mans (FRA), Nice (FRA), Donaueschingen (GER), Salzburg (AUT) and Doha (QAT), just to mention a few. Furthermore, he was part of the German team that came in second at the 2019 Nations Cup in Falsterbo (SWE). In 2020 he has been honoured with the Grande Prize by the Hanoverian association.

Year after year he attracts attention with his above-average sons and daughters. Incredibly, 25 of his sons have been licensed by now, some of them were also named premium stallion. His sons Fortunate OLD and Broadmoars Franello were recently crowned as champion at their stallion approval tests in Oldenburg and Austria.

Foundation has already been delivering a number of highly-placed finalists at German Young Horse Championships. Ferrari OLD was the 2016 Oldenburg champion of four-year-old stallions in Rastede and with 1.5 million Euro the most expensive horse and price record holder at the PSI Auction. He won the vice world championship-title in the division of five-year-old dressage horses in Ermelo (NL) just one year later. His daughter, Feel Free OLD, was second Reserve Champion Mare of Oldenburg, Vice German Champion, finalist at the World Championships for young dressage horses and internationally successful in Small Tour with Bernadette Brune, as were Nadine Husenbeth's Faviola, Hendrik Lochthowe's First Lady W and Maike Mende’s Florine OLD.

Foundation’s filly Fantasy was sold for 107,000 Euros, the absolute top price in Vechta.

The dam Donna Doria has three licensed stallions: the Bundeschampionate finalist Fiderstar, the premium stallion Glock’s Falvio (both by Fidertanz) and the Hanoverian runner-up, Fun4ever (by Feedback). In addition, Anabel Balkenhol’s Grand Prix winner Crystal Friendship and his full sister Donna Wenita (both by Fidertanz), who brought the auction foal Serge Gainsbourg (by Secret), which was sold for the sensational price of 150,000 euro.

Victoria Michalke’s Queeny (by Quattro B) and Kathleen Kellers Lord (by Laurentio) are out of the grand dam Weniga.

He for sure is on his way to become a stamp stallion himself and we are looking forward to all the top level horses that are sired by him.