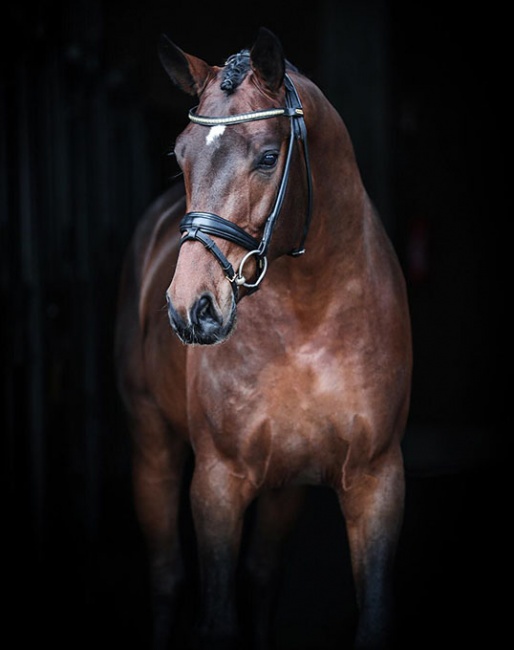 Austrian Olympic squad listed Grand Prix rider Astrid Neumayer is securing her future with an impressive string of stallions. Her newest addition is the Westfalian premium stallion Fineline, which she proudly offers at stud through Dressage Performance Centre Lodbergen.

Fineline is bred by Steffen Jahn and already stood out as a clear stallion prospect when he was a foal. He sold for a whopping 80,000 euro to Helgstrand Dressage at the 2018 DSP Elite Foal Auction held in Nördlingen.

In November 2020 he was a favourite of the 2020 Westfalian Stallion Licensing in Munster and named premium stallion.

"A stallion who convinced on the hard surface and in freedom," said Westphalia's interim breeding director Thomas Münch at the licensing. "He showed excellent lunge work, a canter with potential for collection, a lot of natural balance and a very good hind leg."

Neumayer spotted this colt at the pre-selection already and acquired him for Gestut Pramwahldhof in Austria.

"I noticed him with his three outstanding gaits and positive attitude," Astrid explained. "He can switch on and off. He's on when he needs to show himself, but can also immediately relax and that’s what we need for sport later. His character is outstanding too."

Due to a popular demand for his amazing bloodlines, movements and character, Astrid agreed to stand Fineline at stud in Germany for the 2021 breeding season. Semen is available through Lodbergen

The 3-year old colt is currently standing 168 cm tall and is a real eye catcher.

"He really impresses time and again with his character, rideability and his unlimited movement potential," said rider Sina Aringer, who has taken on the early training and development of this dressage colt.

Neumayer agrees that some light training in preparation of the 14-day suitability test and some breeding will do this young sire some good early on in his career. "I hope he covers a lot of mares and enjoys the year with playing around just like a three year old stallion should do," Astrid added.

Fineline's pedigree is filled with bloodlines proven in sport and breeding.

Sire Floriscount OLD was the reserve champion in the Nurnberger Burgpokal and competed at Grand Prix level. He has sired around 20 licensed sons and 120 award-winning daughters At the moment no less than 25 offspring are successful at S-level.

Dam Pinacoco GE is a full sister to the premium licensed stallions Santo Domingo and Santo Domingo II and the damline goes back to the famous Neustadt mare line of world young horse champion Poetin.

Fineline is standing at stud at Dressage Performance Centre Lodbergen. He is WFFS negative.

The insemination fee is 300 euro + in-foal fee of 600 euro. You can find his semen order form here.