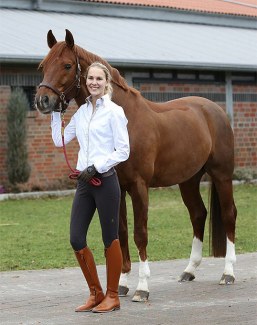 German dressage rider Kathleen Kröncke (née Keller has started a new life in the United Kingdom, moving horses and household to the Cotswold.

In 2003 Kröncke went to study at Stanford University in the U.S.A. and after an internship at McKinsey began working for UBS Investment bank as an analyst. For the past 11 years Kröncke has been working for the London branch of Elliot Advisors as a commodities analyst and investment banker.

Settled in the U.K.

After getting married last year Nikolas and Kathleen decide to permanently move to the United Kingdom.

"We decided to settle in England for some time," Kathleen told Eurodressage. "We found a really nice place in the Cotswolds, the Cotswold Club Equestrian, so I moved with 10 horses to the club at the beginning of November."

Due to Covid-19, the couple is now in the Cotswold as Nikolas can tele-work from home instead of commuting to the City.

Kathleen's first public appearance with her horses in the U.K. will be at the 2020 British Dressage National Convention. She will be riding Helga Stotmeister’s nine year old stallion Flanell (by Fidertanz x De Niro) and Gunter Boeckmann’s 12 year old gelding Hampton Court (by Hofrat x Walt Disney)  in front of judges Peter Storr and Clive Halsall.

"I brought with me San Royal, Desperados, Hampton Court, Standsfield, Kiriakos, Flanell and some young horses I have not competed yet," she said.

Keller, who was active on Facebook and Instagram, developing and show casing her independent business as a professional rider and her sponsors, withdrew from all social media activity in June 2020.

"It was just too much," she explained. "Being a professional rider and running a yard takes so much time and Instagram takes so much time as well. If you want to be presentable at Instagram you have to post every day and do your story. It takes a couple of hours every day.  So I decided to take away some pressure and only concentrate on my horses."

Kathleen is thrilled about the new chapter in her life in the U.K.. "Everything is really exciting right now," she gushed.