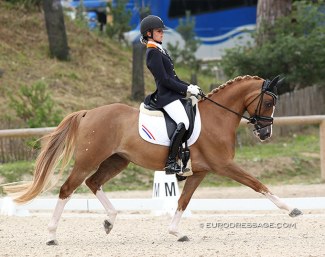 Paso Double is a 14-year old NRPS registered mare by Bodo out of Iris (by Inselfurst). She is bred by L. Van der Wal.

They made their international show debut at the CDI Stadl Paura in April 2012 and after riding in Roosendaal, Moorsele and Compiegne, they were selected as member of the Dutch Pony team for the 2012 European Pony Championships in Fontainebleau, France.

Shortly after the Europeans, Paso Double sold to the Rothenberger as Sven was acquiring Germany and Holland's best ponies at the time for his, at the time, 11-year old daughter Semmieke.

Paso Double became Semmieke's third FEI pony (after Golden Girl and Deinhard B) and was often listed a German team reserve pony, but did not return to any European Championships.

The duo made its CDI debut almost two years after being purchased. In 2014 Semmieke and the mare showed in Vidauban, Addington, and Hagen.

In October 2015 Paso Double sold to the Hamburg based German pony rider Lisa Widmeyer as a schoolmaster.

The new duo first competed nationally and made their CDI debut in Wellington, Florida, having followed trainer Christoph Koschel to the U.S.A. for winter training.

Widmayer only competed Paso Double for two seasons internationally, and only in Wellington. The pony's last CDI start was there at the end of March 2018.

In August 2018, Paso Double sold to Eva Auschill for daughter Merle to ride. The Bad Homburg based rider took the pony back to Semmieke Rothenberger for training and made her show debut on the mare on 29 March 2019 in Halle, Germany. The pair only competed at regional show until their last start in February 2020.

Paso Double was sent to Dutch horse dealer Laura Quint in The Netherlands to be sold.

The 12-year old Swedish Emilia Andersson is the new rider. Emilia announced the arrival of Paso Double in Sweden today on her social media account.