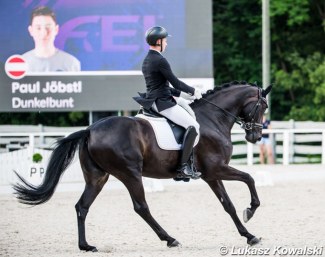 The individual test is the second test the juniors are competing in at these European Championships and the first to decide a set of individual medals. The top 18 riders (with a maximum of 3 per nation) will move on to the Kur to Music in which another set of medals is to be won.

Level Field of Play with Draw Based on Reverse Order?

On Wednesday afternoon the first group of junior riders competed in the individual test, but the class will come to a conclusion on Thursday after the second group has ridden. The current high score of the day is 68.500%, a respectable score but not sufficient for an individual medal.

It is a strange sight that the 70% score barrier was not cracked by any of the 31 riders in the first group. However, a look at the field shows that the order of go for the individual test has been based on a draw decided by the reverse order of the ranking in the team championship test. This means that the least experienced riders or those not yet at peak level will all compete in the first group and the stronger scoring ones on the next day, with medal contenders all starting in the most favourable last section of the class.

When the Competition is held over two (2) days the individual starters shall be drawn in the reverse order of the World Dressage Ranking list and in two (2) groups the highest placed Athletes drawn on the second day.

The FEI Dressage Committee has kept this type of draw firmly cemented in its rules, based on the excuse that TV-broadcast is easier if the best riders are all featured closely together. Considering that dressage is probably the least broadcast Olympic discipline in equestrian sport and its tv-presense absolutely minimal (furthermore streaming is the future of tv), this draw rule only benefits the stronger riders and is only in place to serve them. It makes no sense at Grand Prix level and is ludicrous  in the youth divisions. A level field of play has to be maintained at all costs!

German sport psychologist explains that "rank order bias" is clearly evidenced  in the sport of dressage. “Rank order bias” refers to the tendency to expect a good or bad performance based on at which stage of the competition the performance takes place. An athlete competing early on has been shown to receive lower marks, irrespective of his or her actual performance, than someone competing later in the competition. Psychological research suggests that these effects occur because comparisons between athletes are made in one direction only: performances can only ever be compared to the preceding one, not to the one that will follow. Because of this, judges (and also people in general) will overemphasize any novel positive feature in any new performance.

If the FEI wants to promote fairplay in sport, there can only be one draw: a totally random one.

Anyway, back to business.

The German based Spaniard Lilly Martinez Jacobs and her 13-year old Saxonian Janosch (by Johnson x Samba Hit) are only one of three combinations representing Spain at this week's European Youth Championships with the rest of the delegation having turned around at the Hungarian border because of the Spanish ambassador scared the Spanish Equestrian Federation with no health coverage for Covid 19 and quarantine time (all wrongly informed as the Hungarian government issued a special decree allowing athletes at the Europeans to freely enter and leave the country). In the individual test, Martinez Jacobs scored 68.177% and is standing third so far.

Hungarian Zsofia Lazar and the 12-year old Bavarian mare Balerina Royal (by Herzensdieb x Rubin Royal) are competing in their third, consecutive European Junior Riders Championships. In 2018 they scored 66.912% in 2019 it was 68.188% and this year she ended on 67.912% on home turf.

Swiss Renée Stadler and her new ride Danzador, a 9-year old Hanoverian gelding by Diamond Hit x Lauries Crusador xx, were fifth with 67.853%. The dark bay Danzador is a former licensed stallion, previously owned by Stallion Station Böckmann in Germany. He was trained to S-level by Sandra Kötter but in 2019 Charlott Maria Schürmann briefly took over the ride after which the horse sold to Switzerland to become a gelding and junior mount for Renée. Her previous junior horse was the Oldenburg Capuccino XIV (by Competent x Rohdiamant), which took her to the 2019 Europeans in Italy where they were 13th in the Kur Finals.