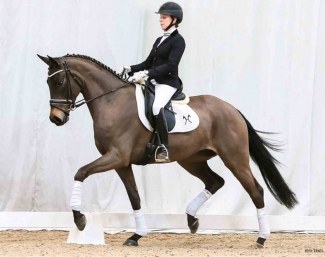 Störtebecker became the best seller of the 2020 Hanoverian May Online Auction for which the bidding concluded on 30 May 2020.

The jumper Störtebecker (by Stolzenberg x Graf Top), who is bred and owned by Axel Bahn, sold for 95,000 euro. Named after a pirate from the Middle Ages, the bay will be trained at Cian O'Connor at Ashford Farms. Seven years ago his full sister Samoa sold to Sweden for 130,000 euro.

The collection of dressage horses was also highly coveted. 14 bidders had an eye on Stella Johns (by Sarotti Mokka Sahne x Brentano II), bred and owned by Dagmar Meyer. The 4-year old sold for 50,000 euro to a renowned training stable in Lower Saxony.

A German bought the 7-year old Quain M (by Quaterhall x Weltmeyer) for 36,500 euro and the 4-year old Furst Friederich (by Furstenball x Donnerhall) for 30,000 euro.

Since Tuesday last week, the highly talented young horses could be tried out in the training and sales centre in Verden. "We had numerous customer groups. Several renowned show-jumpers and trainers took a close look at our youngsters," says Wilken Treu, Managing Director of the Hannoveraner Verband.