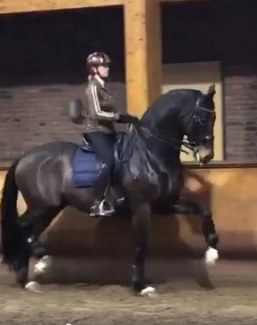 Anky van Grunsven has released a third teaser video of her riding Bon Bravour on her social media today, 13 December 2019.

The KWPN licensed stallion Bon Bravour (by Painted Black x Chronos) arrived in Anky's barn at the end of 2013 and was considered Salinero's big successor, but the horse never competed under the triple Olympic champion.

In October 2015 a short video clip of Bon Bravour in a half pass was launched on the internet. It was the only public footage of the pair released so far.

Today a third 11-second teaser clip of Bon Bravour in passage was released.

Related Links
Anky van Grunsven Shows Off Bon Bravour on Social Media
Where are They Now? Bon Bravour
Partnership Tom Franckx and Bon Bravour Has Come to an End
Van Grunsven Winding Down after the 2012 Olympic Games