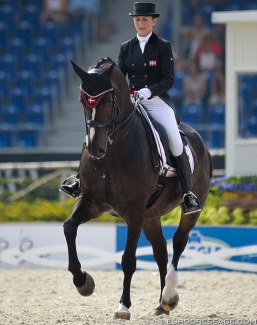 Former Danish Grand Prix team horse My Lady has passed away at age 19. The Danish warmblood was diagnosed with Cushing's Disease two months ago and was put to sleep on 30 October.

My Lady was bred by Marlene Lindholm and was by Michellino out of Marion (by Ritterstern).

Owned by Danish born American Janne Rumbough and competed by Mikala Munter (then Gundersen), the dark bay mare represented Denmark at the 2014 World Equestrian Games in Caen, France, the 2015 European Dressage Championships in Aachen, Germany, and at the 2014 and 2015 World Cup Finals in Lyon and Las Vegas.

She was originally named "Lady My" and began her competition career in Denmark as a 7-year old under Mette Rafn.

Rumbough acquired the mare at the end of 2011 as a fun project to share with her Wellington based friend Mikala Munter.

Between 2014 and 2016 the pair was part of Team Denmark at all major (inter)continental championships. She won 13 out of 93 international Grand Prix starts all over Europe and The United States and was the most winning horse at Global dressage Festival 2 years in a row. They were also short listed for the 2016 Olympic Games but in the end not selected.

In May 2017 the mare was retired from sport and became a broodmare. She produced  two lovely foals, “Valentino" by Vitalis and a filly by Franklin called “My Fair Lady"

"Words cannot describe what a loss it is," Janne told Eurodressage. "It is always so sad to see them go. We just love our animals. She was an incredible mare and I am forever thankful for what she did for us. My Lady had a big group of fans and her popular Freestyle brought many people out to Global Dressage Festival on Friday nights during the winter season to see her Dance under the lights."