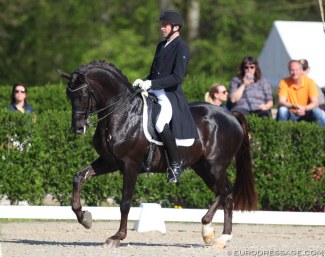 Aaron is by Florencio out of Danielle (by Record) and bred by Wim Oplaat. He is owned by Belgian Louis Livens since he was a youngster.

Matured to Grand Prix in Belgium

He then became the ride of Livens' grand daughter Loranne, who took him to international junior level. They had one CDI start in Roosendaal in 2012.

The liver chestnut was put in training with Belgian Grand Prix rider Jeroen Devroe, who trained him up to the highest level. Devroe competed the stallion successfully at international small tour in 2014 and 2015 and won no less than 8 CDI classes with Aaron.

Because Livens wanted to sell the horse, he eventually moved it to Heiner Schiergen in Germany in 2017. Schiergen only lightly competed him internationally with three CDI stars in 2017, none in 2018, and just two in 2019. At national level Schiergen twice won the German Professional Dressage Riders Championships on Aaron, in 2017 and 2018. This year he was second.

Akiko Yonemoto  has competed on and off in Europe the last twenty years and will now make an attempt to qualify for the Japanese team on Aaron. She is based with Schiergen.

Akiko began competing nationally in Germany back in 1999 with Gigolo (by Clongish  x Tempelhüter), first at L level and up to small tour in 2002. In 2002 she added Ravell (by Rubinstein x Cardinal xx) to her string

She made her international small tour debut on Ravell in 2003. In 2004 and 2005 she competed internationally on Laudarius and nationally at a few shows in Germany with Felix (by Werther x Wenzel) at small tour level.

Her first Grand Prix horse was Elmegardens Fight (by Fruhling x Locarno) which she bought at Hof Kasselmann and showed at international GP level in 2005 and 2006 (CDI's Hagen, Frankfurt and Bremen). Since then there were no international starts for Yoshida, who married and became Akiko Yonemoto.

Last year Yonemoto already acquired the 11-year old Westfalian small tour horse For Comtess Royal and she has shown the horse tiwice so far. The first time at a local event in Krefeld in September 2018, the second time a year later in Wurselen.

The 42-year old Yonemoto is the daughter of Katsumi Yoshida and the director and marketing manager of Northern Horse Park, a horse based pleasure park with a gallery of the history of Thoroughbred racing in Hokkaido, Japan.

Akiko Yonemoto made her show debut on Aaron today at the local event in Ratingen Hösel, where she scored 64.341% in the S* class (small tour).