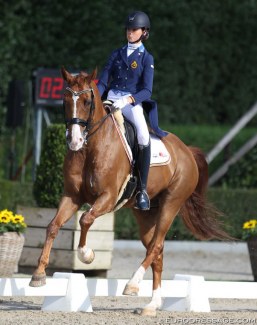 FBW Rainman was a Baden Wurttemberger gelding by Rubicell out of Diana (by Don Primero). He was bred by Franz Schadel.

He was first competed in Germany as a youngster. Stephanie Carras started him as a 3-year old in 2005 and rode him for three years. In 2007 Pieter van der Raadt climbed on board, but he shared the ride with Ilona Kress and Julia Kühn.

The chestnut is listed as owned by Belgian Michele George since 2009. Later owners Bernard Vangheluwe (in 2012) and Wendy Laeremans (director of the Belgian Equestrian Federation, listed as co-owner in 2016) were added to his FEI record.

Michele last competed FBW Rainman at the 2016 Rio Paralympics. In 2017 she handed the ride to her daughter, Camille Vangheluwe, who competed him for two years at international junior riders level. They pair was selected on the Belgian team for the 2017 European Junior Riders Championships in Roosendaal, where they placed 40th in the indvidual test, and at the 2018 European Junior Riders Championships in Fontainebleau, where they were 26th in the individual test.

Fontainebleau was also FBW Rainman's last international competition. He did not compete in 2019.

On Friday 11 October 2019 FBW Rainman suffered from a severe colic attack. He was transported to the equine clinic, where he was operated on, but he did make it out of surgery.

"What I do remember most, is that you were the one who triggered me day after day to climb out of that wheelchair, you were the one who taught me how to fight back, you showed me day after day that loving someone may never be a one way direction...there was that special thing called chemistry, something others never really understood," said a devastated George. "You were my perfect partner in crime, my physiotherapist, my psychologist, the other half of me. You promised me to take care of our little girl and you transformed her into a real little lady. You took her twice to the Europeans and never let us down."