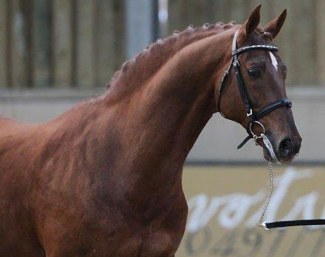 The Selle Français licensed stallion Rosenprinz D has passed away on the weekend of 1 September 2019 at age 21.

The Dutch warmblood Rosenprinz D was by Gribaldi out of Meine Melodie (by Rosenkavalier x Freiherr). He was bred by Piet Meinen in The Netherlands.

The bay was discovered by Belgian horse dealer and FEI rider Dominique Mohimont, who won the 2002 Belgian Young Horse Championships with him and went on to represent Belgium at the 2003 World Championships for young dressage horses in Verden, where they were 18th in the 5-year old consolation Finals.

Rosenprinz D also won the 2004 French Young Horse Championships in Saumur under Stephanie Brieussel (née Collier) and she competed him in 2004 at only one show, the CDN Le Touquet, where he was presented in the 6-year old classes.

He was involved in an accident in 2005 and was retired to stand at stud, initially in France for two years. The chestnut got approved to breed for Selle Français and SBS.

"At the end of 2005, one day my groom forgot to close his door and he bolted to the field. He twisted his right hind in a hole and sustained a several tendon injury," Mohimont told Eurodressage. "He never returned to work. Two years later I took him to France because I wanted to give him a chance to be constructive as a breeding stallion. There was more interest in Rosenprinz from the French breeders than the Belgian ones. I believe he stayed there two years and eventually returned because he didn't cover enough to compensate the boarding costs."

Rosenprinz moved back to Belgium and in 2011 he went to stand at Jean-Philippe Lejeune's Les Ecuries de la Préalle in Herstal, Belgium.

"I sold him to Lejeune for a symbolic euro so he could still enjoy his life as a breeding stallion," Mohimont explained. "Two years ago I heard he was standing at stud at the national equitation school in Gesves."

He has 36 offspring registered for sport in France. His three most famous offspring are Qoréane de Lauture, who competed on the French team at the 2019 European Children Championship under Émilie Le Niger; Guillaume Recoing's Qorto Seaprinz, who became the 2007 French Young Horse Champion  in the 3-year old division; and Laurence Albert's Ripley Fleuri, who was the 2010 French reserve young horse champion.