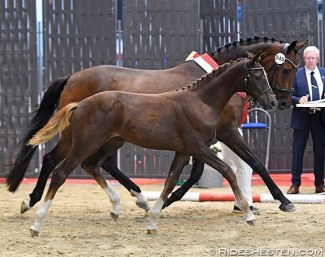 The filly Vilard’s Frina and the colt Grand Quest-Bell were named the Danish Warmblood Foals of the Year 2019 at the annual Elite Mare and Foal show in Vilhelmsborg, Denmark, on 23 August 2019.

The best of Danish breeding was showcased at the Danish Warmblood Elite Show at Vilhelmsborg, where regionally selected foals, 2-year-old fillies and saddle-tested mares compete to win the champion titles in the breeding categories dressage or show jumping.

Saturday afternoon four foal champions were named, amongst them two in the dressage division.

An exceptionally attractive and and very elegant liver chestnut named Grand Quest-Bell  earned the title Dressage Colt Foal of the Year. This tall, noble and large-framed foal with very supple and ground-covering, rhythmic gaits is a full brother of the premium stallion Giovanni Bell. Grand Quest-Bell is by Grand Galaxy Win x Blue Hors Don Romantic and is bred by Tina & Nicolai Jepsen.

About the champion Grand Quest-Bell, the judges said, among other things, that it was a wonderfully beautiful model, with lots of expression and radiance, a suitable degree of nobility and not least excellent function. The step was described as spacious, tact-proof and agile, there was great action and up-hill tendency in the pile and the canter was extremely well balanced and ground covering.

Vilard's Frina, Queen of the Fillies

A noble and light-footed foal named Vilard’s Frina took the title Dressage Filly Foal of the Year. She is by Franklin x Blue Hors Don Romantic, bred by Stutteri Vilard, and is out of the same damline as the international champion stallion Global Player. Frina danced her way through the finals to win her champion title.

About Vilard's Frina the judges said: "A real eye-catcher who is adorable, feminine, well-mannered and noble among other things." Vilard's Frina also received praise  for his " impressive self carriage, with plenty of spring, airtime and suspension in the movement."

Sunday at the Danish Warmblood Elite Show is totally devoted to the evaluation of 2-year-old fillies and young saddle-graded mares.