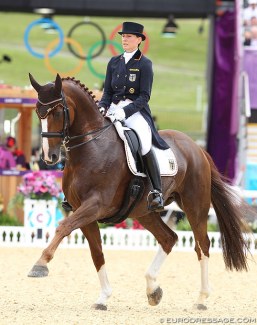 Anabel Balkenhol's career making Grand Prix horse Dablino has passed away four months ago, on 27 February 2019. He was 19 years old.

It was a second blow for Anabel Balkenhol in a short period of time. In April Anabel also lost the ride on her number one Grand Prix horse Heuberger. The horse's owners, the Erdsiek family, decided to relocate the Trakehner stallion to Helgstrand in Denmark to be sold.

The horse made its first claim to fame under Holga Finken at the 2006 World Young Horse Championships, after which the sensitive chestnut became Anabel Balkenhol's ride. They won the 2009 German Developing Grand Prix Horse Championships and won the 25th Otto Lörke prize.

The pair went on to represent Germany and won team bronze at the 2010 World Equestrian Games and they rode as individuals at the 2012 Olympic Games in London.

They consistently competed at international Grand Prix level from 2009 through 2017.

In October 2017 Balkenhol hinted at the end of Dablino's sport career but kept the door open to one or two more shows. However, this never happened and in October 2018 Balkenhol announced that Dablino was retired from competition sport.

He spent his retirement in the field with a companion and on 27 February 2019 he passed away suddenly in the pasture.