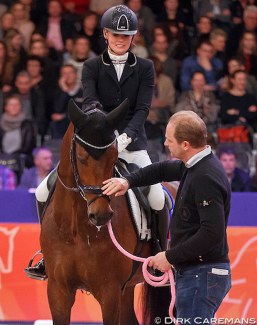 The 13-year-old mare Donna Charian (by Blue Hors Don Schufro) has been sold to the 30-year old Swedish Grand Prix rider Anna Jarnald. The liver chestnut mare won the 2010 South German Championships in Nordlingen as a 5-year old and then sold to Denmark, where she was member of the Danish Junior Riders Team at the European Junior Riders Championship  in 2012 and 2013. She competed up to national Grand Prix level in Denmark. Trained by Stefan Jansson, Jarnald is a former Swedish youth team rider.

Dutch dressage rider Renate van Uytert-Van Vliet and her husband, Dutch stallion owner Joop van Uytert, are expecting. Renate announced at the end of December that she is five months pregnant and due to give birth on 7 May 2019. The 28-year old Van Vliet and Van Uytert got married on Saturday 18 August 2018. Van Uytert has one daughter out of his previous marriage to Anne Franssen, the 11-year old Gwen.

The Swedish owned KWPN gelding Iskander (by Apache x) has sold to Andreas Helgstrand. Previously owned by Sophie Skoben Rosen of Stall Säthälla , who also discovered and owned the licensed stallion Jovian before she sold him to Helgstrand, Iskander was sourced in Ad Valk's stables. Under Femke de Laat the bay gelding finished 9th in the 2017 Pavo Cup Finals. Cathrine Dufour will pick up the training of the gelding.

The 7-year old Oldenburg bred Furst William HC, the highly popular young dressage stallion by Furst Wilhelm x Lord Sinclair x Ferragamo, has tested positive to the WFFS gene. Furst William won the 2015 Bundeschampionate and a high scorer in the stallion performance test. He is now in training with Beatrice Buchwald and finished fourth in the 6-year old finals at the 2018 Bundeschampionate.

The 2018 European Children Champion horse Happy Feet now has its third new rider in five months time. After Sanne Buijs gave up the ride on the Van Woudenbergh owned KWPN bred gelding, Jill Bogers took over the ride in September 2018. Two months later, that partnership was ended and the owner allocated the ride to Anne Uijtewaal under the stipulation that the horse has to stay stabled with the owner. Two months later a third rider is now on board of the 12-year old Happy Feet (by Tuschinski x Animo): FEI pony rider Sanne Evers.

Zuchterforum reported that Hanoverian dressage horse breeder Wilhelm Stadtlander passed away at age 72 on 6 January 2019. Stadlander was best known for having bred the licensed stallions Benicio and Sunciro. He also stood Velten Third at stud, who is the dam sire of Rascalino.

De Hoefslag reported that Luna, the dam of Salinero, passed away on 27 December 2018 at age 29. The State Premium Mare Luna was named Hanoverian mare of the year 2008. She produced double Olympic Champion Salinero (by Salieri) as well as his full brother Seven Up, who competed at the 2004 Olympic Games under Korean show jumper Jung Hyoun Joo. Luna (by Lungau x Pik Bube II) is bred by Jürgen Siltmann and owned by the breeder's syndicate Bünger. Horst Bünger purchased Luna's dam Pikora in 1988 in foal with the liver chestnut Luna. The filly qualified for the Louis Wiegels Elite Hanoverian mare show where she became reserve champion and obtained her State Premium title.

Swedish Grand Prix rider Antonia Ramel lost her former small tour partner, the 20-year old KWPN bred Seigneur (by Juventus x Zortin). Ramel acquired the chestnut while she was training with Anky van Grunsven, but the horse struggled with a severe injury and was only shown at international small tour level a few times in 2009 and 2010. Still, Ramel cherished the horse, but on Friday 18 January he was put down after developing complications after colic surgery. "You have taught me so much in life and given me inspiration and strength through all the years," Ramel wrote on Instagram. "You’ve shown that impossible things are possible to achieve. You have given me so much happiness and joy. And you have always had a great sense of humour. You not being here anymore leaves me with a big emptiness. You will always be a big part of my heart."

At a smaller Hanoverian stallion approval in Verden on 22 January three of four presented stallions were approved for Hanoverian breeding. They are the Trakehners Anthony (by Duke of Hearts xx x Vivus), owned by Hendrik Reinelt, and Kros (by Ajbek x Sword xx), owned by Jens Hoffrogge, as well as Thore Kockerols' Batton Rouge (by Bordeaux x Rotspon). Not accepted was Margit Eisner's Trakehner stallion Fellini (by Berlusconi x Grafenstolz).