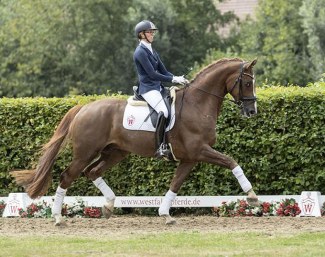 A rather small collection of 29 young sport horses and 10 foals was on offer.

The 5-year old chestnut gelding Sir Hubert (by Sir Heinrich x Florestan) was the most expensive horse in the collection, selling for 100,000 euro to a client in Hessia. Sir Hubert is bred by Hubert Brinkmann.

The second most expensive horse was the 3-year old Barolo II (by Bordeaux x Munchhausen), bred by Rainer Heidenreich. He switched owners for 46,000 euro and moves to Rhineland.

The best selling foal in the lot was the chestnut colt Secret Fun (by Secret x Florestan), bred by ZG von Ameln. He sold for 20,000 euro.