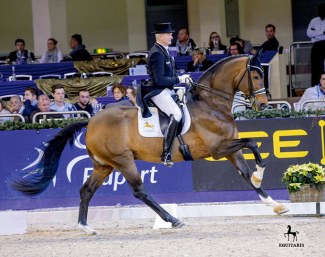 Most recently he excited everyone in the Frankfurt Festhalle, now he will thrill his audience on Sunday, 18 February 2018 at 2 pm (14:00) at the Oldenburg Horse Center in Vechtan Germany. We are talking about Escolar, the double German Championships winner, Burg-Pokal second and main sire of the stallion station Gut Neuenhof.

Wherever the now nine-year-old Westphalian enters the arena with his rider Hubertus Schmidt, he sets new standards with his incredible movement, not seldom rated with a 10.0 by the judges.

Coming along to Vechta are Escolar’s neighbours: above all, his father Estobar NRW who is successful up to Grand Prix, the Westphalian reserve champion stallion and schooled up to the advanced classes Goldberg as well as the promising young stars Vainqueur, D’alessandro and Cashmere. Cashmere, being double talented an reserve champion stallion jumping, attracted attention at his licensing in Münster-Handorf 2017.

The program of this well worth seeing collective stallion show in Vechta is brought to you by the stallion station Gut Neuenhof with the stud Peterhof, Dressage Grand Ducal, stud Tannenhof and the Ludger Beerbaum Stables. This was the audience can look forward to seeing the triple Dressage Horse World Champion Sezuan, who will be presented by Patrik Kittel for the first time, the warmblood breeding approved Lusitano stallion Dragao das Figueiras under Sascha Schulz/LUX, the Grand Prix placed Jumper Chacco Chacco GT with Andres Knippling as well as Ludger Beerbaum’s hope for the future Comme le père.