Judy Reynolds Named the Irish Field Rider of the Year 2016 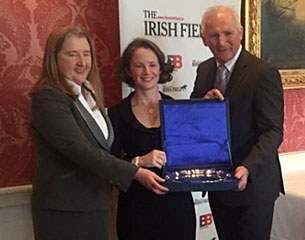 Judy Reynolds has been named Dressage Rider of the Year for 2016 by Irish Field, the leading equestrian publication in Ireland. This is her fourth time to win this accolade.

A native of Kilteel, County Kildare, Judy and the then 14-year-old Jazz gelding Vancouver K, owned by her parents Joe and Kathleen Reynolds, were the first Irish combination in 24 years to qualify for the Olympic final in Rio de Janeiro in August 2016.

Reynolds' outstanding performance at the Olympic Games, where she placed 18th in the final, was one highlight of many in a season to remember for Judy. The German-based rider placed eighth in the World Cup Final in Gothenburg in March.  The same month, Reynolds secured qualification for the Olympic Games and set a new Irish international Grand Prix Kür (Freestyle to Music) record score of 79.70% at the CDI5* show in Al Shaqab Doha, Qatar. Her outstanding form continued in June when she won the Grand Prix at Achleiten CDI4*, Austria with a record Irish international Grand Prix score of 75.24%.

After the Olympics she became the first Irish dressage rider to win at FEI big tour international level in the USA, when sweeping the boards at New York and Devon CDI shows with an unprecedented four straight wins, also a first for Irish dressage.  It didn't stop there, her final victory of the four, in the FEI World Cup qualifier in Devon, Philadelphia, resulted in another entry in the record books as the first Irish rider to win an FEI World Cup dressage qualifier. Judy ended the year leading the FEI Western European league on 45 points, another first for an Irish dressage rider, after a top four placing at the FEI World Cup qualifier in Olympia, London.

Judy was presented with The Irish Field Dressage Rider of the Year award by Leo Powell, Editor of The Irish Field at the awards lunch in the K Club, Straffan, Co. Kildare, Ireland on Monday 6 February 6, 2017.

Judy also picked up her award for winning December 2016 Star of the Month. There were twelve monthly award winners from various equestrian disciplines and Judy Reynolds was named as the overall Star of the Year for 2016.