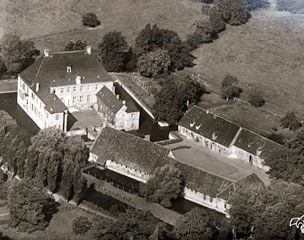 At the 1952 Olympic Games in Helsinki Germany did not win the team gold medal in dressage, but the team set a record of a different kind: All three horses had been bred by the same breeder: Count Clemens von Nagel. His historic mote of Vornholz not far from Warendorf had been one of the Germany's most successful private breeding stables until von Nagel's death in the 1970s.
The legendary Anglo Arab Ramzes x called the beautiful old stables his home.

Dressage horses like the first World champion Mariano (Westfalian by Ramzes x), Pernod xx (by Marcellus xx) and the latter's son Macbeth, as well as the 1972 jumping Olympic champion Robin (by Ramzes x), were bred and born where the immortal Holsteiner stallion Ramiro grew up.

Eurodressage interviewed German journalist Gabriele Pochhammer, retired chief editor of St. Georg magazine and now its publisher, on the stud's history and its influence on today's breeding. Pochhammer called Vornholz her home in her 20s when she worked there for Count von Nagel.

When did the breeding venture at Vornholz begin?

(Editor's note: The Beberbecker horses were bred from 1724-1929 in the Beberbeck State Stud in Hessen. The breed is based on English thoroughbred, Norman horses, Mecklenburger, Hanoverian and Senner horses and the aim was to produce an outstanding cavalry horse).

From when could s one peak of sport horse breeding?

From the beginning. Initially the aim was to breed horses high in blood for steeple-chasing, which was practiced by the cavalry officers with great passion. Count Nagel, who finished his officer's career when taking over Vornholz, literally said: „According to the milieu of sport which I had lived for years only the breeding of high performance horses came into question. From the beginning the limited space available at Vornholz showed the way to a practice a breeding of a numerically limited number of sport horses instead of breeding masses of youngsters for the army or do the rearing of a bigger number of colts for federal breeding.“

Which type of mare got the breeding programme started? What did they look for in dam lines?

At the beginning it were thoroughbreds mares like Perlenreihe (by Anakreon xx) which was paired with the thoroughbred Marcellus xx who was stationed at Vornholz and brought the successful steeplechaser Perpetua xx (80,000 Deutsch marks in career earnings) and the later dressage horse Pernod xx. The latter won 40,000 DM on the race-trak before he became an international dressage-horse and breeding-stallion. After the closure of the army racing-stables also the thoroughbred breeding ar Vornholz closed. 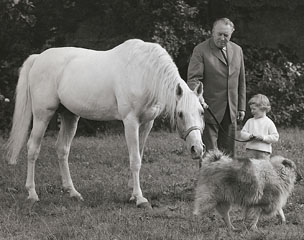 Before World War II Count von Nagel had also set as goal to collect and preserve the few Beberbecker bloodlines still available (editor's note: After the stud's closure in 1929 most of the horses were sold to Poland or East Prussia). Count Nagel had spent his childhood and teenage days on this stud as the son of the last Head Stable Master Paul von Nagel. He described the Beberbecker horses as hard performance horses and much regretted the sale of the whole stud to Poland in 1929. he didn't consider it clever.

There were no brood mares from dam lines in Germany anymore, but a few stallions like Thronerbe and Meleager which were used in the Hanoverian breeding area remained. Trendelburg (by Thronerbe) and Finnländerin (by Flirt), in foal by Meleager, carried the Beberbecker blood to Vornholz. Count von Nagel considered the purchase of the Beberbecker stallion Oxyd (by Irrlehrer out of Oxalis, by Metellus xx) as a stroke of luck.

So the horse type at Vornholz at those times was a mixture of Hanoverian mares with Bebernecker blood and English thoroughbred. The aim of breeding was a "big framed performance horse similar to an English hunter."

Can you characterize the stallion Oxyd?

I never knew Oxyd personally but Count Nagel wrote: “This stallion, model of a strong, hard, big framed hunter, first had shared the destiny of many Beberbecker stallions in East-Prussia until in the second half of his breeding career he got more chances at the big studs such as Wohnsdorf of Freiherr von Schrötter and Juditten of Mister von Kuenheim, which he could use. The connection of Oxyd with the mares mentioned above resulted in the Vornholz horses.

What was the aim with the purchase of Ramzes x? How was he received by the breeders at the beginning of his career in Germany and what happened after his offspring's first successes? Which characteristics did Ramzes hand down to his dressage offspring?

The purchase of the Polish Anglo-Arab Ramzes (by Rittersporn out of Jordi, by 532 Shagya X/3) was  another stroke of luck for Vornholz. Initially he was a state stud stallion in Janow Podlawski where he had been used as a reliable driving-and hunting-horse. Ramzes came to Germany after the Russian campaign with all the horses and first arrived at the Cleverhof in Schleswig-Holstein. After the end of the war the Polish Lieutenant-Colonel Bielecki bought him and rode him with success at jumping shows for the Allied. After the closure of the Polish unit Bielecki did not return to communist Poland, but emigrated to the USA and sold Ramzes X to Count von Nagel who knew him and was aware of his jumping talent. He was particularly convinced of the Rittersporn-blood for jumper breeding because Warszawianka, a daughter of this stallion, was on the Polish team at the 1936 Olympic Games. 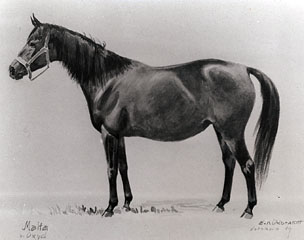 In Vornholz Ramzes x was also used as a jumping horse, ridden by Micky Brinkmann, a former rider of the Cavalry School of Hanover. Ramzes x was not only used for the mares of Vornholz, but also for Westfalian breeding, where he refined the sturdy types for breeding's sake. His son Radetzky, bred at Vornholz out of Malta (by Oxyd), changed Westfalian breeding and founded a still existing, widely ramified and in dressage sport extremely successful line.
After the first successes of his offspring Ramzes became highly used, but the number of mares before articificial insemination, frozen sperm etc. can not be compared with nowadays. Ramzes x was a homozygous grey; he handed on his good character, his intelligence and beauty. Some offspring  were a bit stiff in the back.

Ramzes had a second breeding career and got leased to Holstein in 1959/1960 after the striking jumping successes of Ramona under Alwin Schockemöhle, Retina  under Fritz Thiedemann, Ramzes XIII under Kurt Jaransinki, Romanus under Hans-Günther Winkler, later Robin under Fritz Ligges). In Holstein Ramzes' line on the sire side has almost disappeared, but he is firmly established in the dam-lines, in particular through the on Ramzes in-bred stallion Capitol.

Which role did Vornholz Stud play after the restart of the German equestrian sport after the end of World War II?

Vornholz was the first stud which was strictly dedicated to the breeding of a performance horse which made it a pioneer. Different from federal breeding, their horses were not been suitable for agricultural work. Especially after the war the responsibles for German breeding tried to breed against the mechanization of farming in the so-called „elephant-period“. Therefore they bred heavy horses. In the end this was only a delay for the breeding of a modern riding horse. Due to his skilled and financial independence Count von Nagel was able to follow his breeding goal at a time in which the small rural breeder was still dependent on the breeding administration and the stable masters.

Can one label Vornholz as the first breeder in Germany specialized in dressage or did the early successes in the 1950s create that impression?

Yes and no. Count von Nagel did not consider himself a dressage horse breeder. The successes of the Vornholz dressage horses at the 1952 Olympic Games in Helsinki (Afrika, Adular, Chronist xx) had not been possible without Otto Lörke who trained these horses and their riders. Lörke, who had come to Vornholz after the war as a refugee, found excellent horses, but was also able to show them off in the very best way. 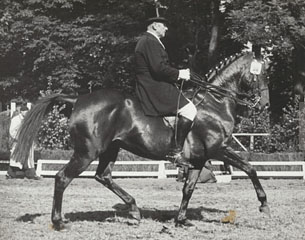 Other good dressage horses from Vornholz were sired by Ramzes x (Mariano, Tiga), but also Pernod xx had proven himself as a good dressage sire by producing very beautiful and exceptionally well moving offspring (Macbeth). But Count von Nagel's heart beat, I think, more for breeding jumping horses, which explains his orientations towards Holstein. Therefore I wouldn't claim that Vornholz specialized in breeding dressage horses.

What is Vornholz' legacy for German equestrian sport, apart from fond memories?

The consistent breeding of performance horses was still new back then, apart from thoroughbred breeding. Therefore Count von Nagel was already in his lifetime a proverbial lighthouse whose example future-oriented breeders followed. Those breeders came very far with their independent decisions, which were occiasionally not shared by the breeding administration. The successes of the Vornholz horses proved it all, having won 5 medals at Olympic Games.

Moreover the blood of the Vornholz horses can still be found in many sports horses to date, even though the stud was closed after the death of Count von Nagel in 1977. There is still much Ramzes-blood in the Westfalian and Holsteiner breeding. The sire of the century, Ramiro who came as a foal in utero to Vornholz, started his career there. Ramiro was the first "European" stallion who -as a jumping sire— also became successful in other countries.

Interview by Silke Rottermann for Eurodressage