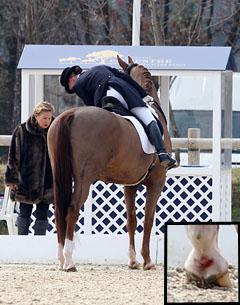 A regular columnist for Eurodressage, IDRC secretary-general Wayne Channon attended the inaugural FEI Sports Forum in Lausanne where the very "Blood Rule" was up for discussion by the FEI Veterinary Committte. Wayne provided a debrief of the forum focusing on the aspects important for dressage.

Whilst dressage did not feature, the most relevant was the veterinary session which was interesting and very relevant.  The main points covered were:

Of course, the highest profile issue has been the “blood rule”.  As Frank Kemperman pointed out, we have to rename this to the “Elimination Rule”.  Whilst not as emotive a title, I agree with his sentiment - it is about horse welfare not just about blood.

I take my hat off to John McEwan and his team, they nailed the issue from a veterinary viewpoint.  Their statement at the forum was clear and works for all horse sports:

"The Veterinary Committee at a meeting on 6-7 February 2012 discussed this issue.

If a horse exhibits a sign that may indicate that it is no longer fit to compete during a competition then it is the responsibility of the Ground Jury to stop the horse from the competition. After an assessment made by the Veterinary Delegate and Ground Jury, if bleeding has stopped and the horse is fit to continue to compete, then it may be permitted to do so if this is possible within the structure and regulations of the discipline. If a restart is to be permitted then consideration will be need within the discipline structure for the fairness of the sport.  A recommendation was made that where there is structural need for a discipline regulation that these are reviewed and harmonised as far as possible.

The welfare of the horse must be paramount in any decision taken."

Dissecting this into the main points:

It is now up to the Dressage Committee to decide the best rule for dressage and I am sure they will consider the views of all the stakeholders in this respect.

The other issue, and one that I had not considered before, was should clones and/or their progeny be allowed to compete.

It was raised so the National Federations should consider it and no conclusion was presented.

Going back to the 2007 FEI General Assembly, it was decided that the FEI would oppose cloned horses competing on the basis that it goes against one of the FEI’s basic objectives “to compete in international events in fair and even conditions”.

This again shows that the FEI Veterinary department's prescience and well preparedness in what will become (even if it is not today) a significant issue.

From a practical viewpoint, can the FEI legislate this?  To get an FEI passport, a horse does not need a pedigree.  So, if you bought a cloned horse you could get an FEI passport and compete so long as you didn’t tell anyone that it was a clone.

What do you think?  Should cloned horses be allowed to compete?  If not, why not?  They won’t look like or perform like their genetic donor.

The full details of the Sports Conference are available online.