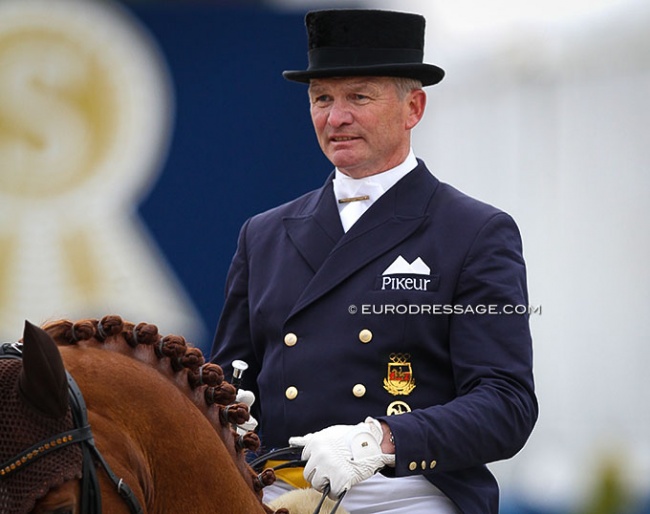 There were already several dark omens in the sky, but now it is official: Hubertus Schmidt has announced his retirement as a competitive dressage rider for health reasons. He will continue be strongly involved in dressage sport from the ground.

The first signs of a faltering health began in June at the German Dressage Championships from which Hubertus had to withdraw "due to an adductor problem."

Two weeks later at the CDI Kronberg, he scored 72.283% in the Grand Prix on Beryll and then had to withdraw from the kur for health reasons.

In October he planned on competing at the CDI-W Zakrzow, but had to pull out from that show too for problems to his back.

"For some time now I've had health problems that keep me from riding," Schmidt told dressursport-deutschland.de. "That's why I decided to devote myself entirely to training riders and horses from the ground."

Based at Fleyenhof in Borchen near Paderborn, Schmidt was initially trained by Hans-Georg Gerlach. He married his wife Doris at age 22 and graduated as a certified rider at age 23 with the Stensbeck plaque. He rode his first S-level test in 1984 and exactly 10 years later went down his first international centerline in Hamburg on Forzando (by Fortissimo x Pontius).

Schmidt was decorated with the prestigious title of Riding Master in 2004.

Schmidt also has several American students that he expertly guided to the highest level in dressage sport, such as Cesar Parra, Oded Shimoni, Todd Flettrich, and Devon Kane.