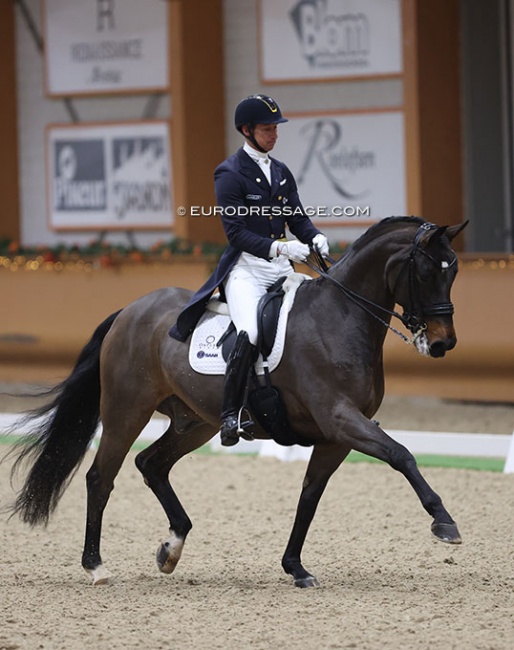 Patrik Kittel has announced Delaunay's retirement from sport after the 16-year old Oldenburg gelding competed in his final show at the 2022 CDI Kronenberg on 2 - 4 December 2022.

Delaunay is by Dr. Doolittle out of Fara (by Feinbrand x Kirkes x Tiro). He is bred by Ulrick Brinkhus

Named after the famous French cubist and abstract painter Robert Delaunay, the bay gelding was owned by Austrian Sandro Nuxoll (née Kopf). She discovered him as a foal at the 2006 Oldenburg Autumn Elite Auction.

Nuxoll trained Delaunay from young horse level to M-level.  She first showed him in Germany as a 4-year old in 2010, represented Austria at the 2011 World Young Horse Championships in Verden, where they were 19th in the 5-year old consolation finals, and then competed through 2012.

The horse made its come back to the show ring at Grand Prix level under Patrik in November 2014 in Ankum and the international debut followed a month later at the CDI Franfurt, although the pair retired.

In March 2015 their partnership took flight in Vidauban and they captured four consecutive victories in France and Falsterbo.

Their season highlight was in 2017 when Delaunay moved into the number one spot in the barn and was the choice for the Swedish team for the 2017 European Championships in Gothenburg, where they were 9th in the Kur to Music finals. At the 2017 Swedish Championships, they won the first round but had to withdraw as the horse injured itself overnight.

In 2019 they competed at the World Cup Final in Gothenburg, where they were 6th. They won the 2019 and 2020 Swedish Grand Prix Championship.

Delaunay consistently showed until April  2021, but then an international break of 1.5 years followed. The horse returned at the CDI Fot in October 2022, where he won the short grand Prix. At the CDI Kronenberg this weekend the pair was second in the Grand Prix (73.761%) and won the Kur to Music (76.410%)

"You have been our friend and partner in crime for almost 10 years, gone beyond for us, won medals , countless of Gp, after 8 years," Kittel wrote. "In Grand Prix we felt that you should end it on top with a victory.. on this weekend in Kronenberg you showed again that your heart and mind always fight and you won. You will now join the rest of our retired stars and Marie Johansson will hack you out."

Lyndal Oatley added, "above and beyond grateful to have had this boy in our life with a Grand Prix career spanning half his life! Not many can say they achieved what he has."