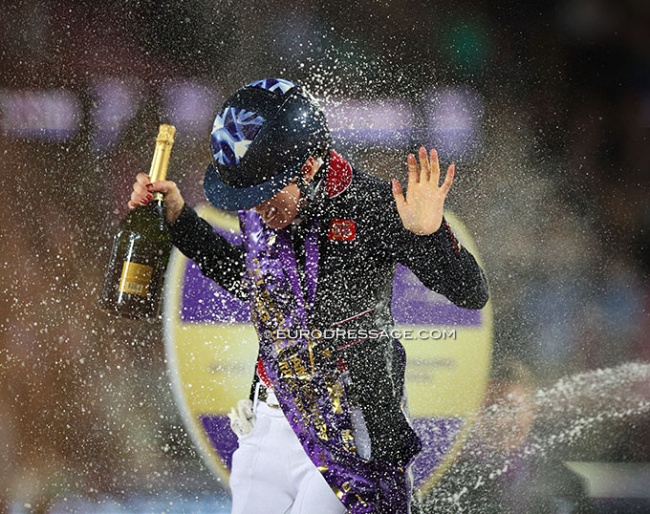 There was magic in the air tonight at the Stutteri Ask Stadium in Herning, Denmark where Great Britain’s Lottie Fry and her spell-binding stallion Glamourdale claimed their second gold medal of the week, freestyle gold,  at the 2022 World World Championship Dressage.

But the electricity and excitement in the air this evening was on a whole other level. The sound of more than 11,000 people screaming with delight at the glorious sight of beautiful horses and their stylish riders dancing under the floodlights heralded the arrival of a new era in the sport that has been evolving rapidly over the last decade and more.

Fry and Glamourdale were third-last to go of the 15 Freestyle starters and from the moment they entered the arena they had the crowd under their spell. From foot-stomping passage and piaffe to the 11-year-old stallion’s trademark high-stepping extended canter they kept the audience enthralled, and despite a couple of mistakes they racked up colossal scores to put 90.654 on the board and bring the spectators to their feet in a joyous frenzy.

Van Liere had to follow that but wasn’t the least bit intimidated. Her 10-year-old stallion just seemed to grow in confidence with every move, and picking up scores of nine and ten along the way the elegant pair posted 86.900 to slot into silver medal spot. But Laudrup-Dufour and her 10-year-old gelding Vamos Amigos demoted them to bronze with a performance that put 89.411 on the board and set the home crowd alight yet again.

Van Liere was delighted to collect her second medal of the week at her very first World Championship. The 31-year-old athlete has really put herself on the map with some exceptional performances over the last five days.

“I’m incredibly proud of my horse, he did such a fantastic job today”, she said tonight. “On Saturday and on Monday he was a little bit tense and I thought today with all the audience he would be more tense but he was actually so relaxed. He’s just getting better and better so I was extremely proud that he did such a good job and I had all his focus”.

Laudrup-Dufour was under the utmost pressure with the hopes of her country sitting heavily on her shouldersm but she said she just decided to enjoy the experience “and it was fantastic riding through that gate again. The crowd tonight were the real superstars, I’ve never seen anything like it, it was like being at a soccer game!”, she said.

“I was super happy with my horse, he was hot today but with that said he’s ten years old, it’s my third horse within four years to take an individual medal with and I’m very proud of him and my team”, she added.

She was asked afterwards if she was disappointed with her result, “no you always go for gold but it’s an honour to be here with these two girls and I do really think that we are a part of changing the sport of dressage and it makes me so proud!”, she pointed out.

Fry said she’d never experienced anything quite like riding into the arena tonight. “The second you entered the crowd was going crazy before you even started, and that already was exciting for Glamourdale to go in there and he knew that it was full and he needed to show off. But as soon as the music started it was the most insane feeling, he was dancing to his Freestyle and I just felt I could sit there and enjoy it. I was listening to the crowd singing along and getting excited about his extended canter. Honestly it was the best feeling in the world and I never have been in an arena like that or ridden a test like that before.

"This is exactly what Glamourdale was made for - arenas like this, music like that and floor-plans like this! It was all perfect today," said Lottie Fry (GBR)

Judge at C, Denmark’s Susanne Baarup, said the judges enjoyed tonight’s Freestyle competition just as much as everyone else.

“It’s amazing to sit there giving marks for such good riding and floor-plans and music, and it’s the small details that decide the placings and we saw extraordinary quality. Out of 15 combinations 13 were plus 80% scores. It’s an honour and a pleasure to be able to judge a world championship and for me it’s particularly special because I was born in this area”.

She was also delighted to see so many young horses doing well. “A lot of people say we don’t see a lot horses form the (Young Horse) world championships doing Grand Prix. But here in this field of nice horses there have been a lot who had success as young horses. It shows the basic riding was done in the correct way”, she pointed out.

Laudrup-Dufour talked about the changes she sees happening in the sport. Changes for the better.

“I think style-wise all three of us (herself, van Liere and Fry) we are light riders and we want to try to shape the horses in the softest way possible. It is tricky with such powerhouses, all our three boys are super powerful and it takes a lot to control it but I think it’s impressive - the way both Lottie and Dinja ride, it’s so light and you can’t see that they are doing anything. As Susanne said to see the young horses coming through the system is great. They start to get older now and they can show how much the breeding meant over the last few years, you can tell that these horses are born to do this and it makes it so much more fun for us riders. You don’t have to tell them what to do, you can just go along with them”, she pointed out.

One horse who is certainly born to do it is Glamourdale who rocked the ring on is way to victory this evening. ”It is really hard to believe this all actually happened”, said Fry, “but everything with Glamourdale is nothing short of amazing. He has had this music at stallion shows growing up, so he always dances to it. When the crowd joined in and sang tonight he just loved every minute of it!”

Photos © Astrid Appels  - NO REPRODUCTION ALLOWED (NO SCREEN SHOTS!)
Eurodressage photographed all dressage riders competing at the 2022 World Championships. If you are want to use our photos for social media or prints, email us first.