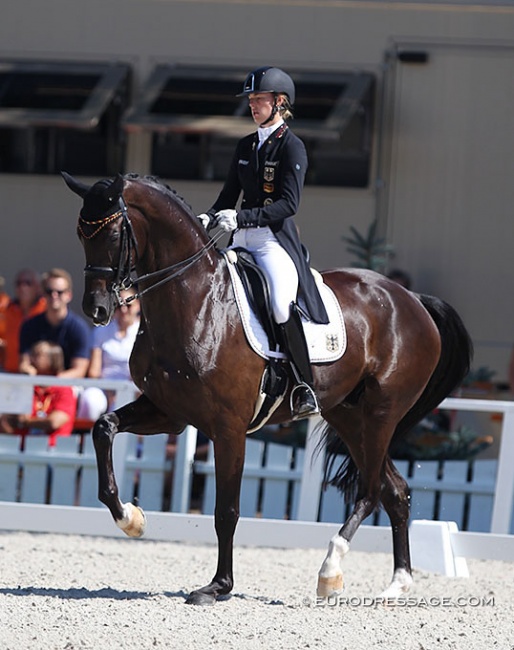 FBW Sunfire  a 13-year old Baden Wurttemberger bred gelding by San Amour out of Fantasie (by Freudenfeuer x Puschkin x Vierzehnender xx). He is bred and was owned by Volkmar Andre.

The dark bay gelding was first competed as a 4-year old in 2013 by Kim Kroh. In 2015 Udo Bosch-Mayer rode him before young Ann-Kathrin Lindner took on the ride.  They moved up to S-level in 2017 and to Grand Prix level in 2019.

Lindner and Sunfire won team gold at the 2019 European Under 25 Championships in San Giovanni in Marignano. Individually they were fifth and seventh.

In the 2020 they rode to team and short grand prix test gold and kur bronze at the 2020 European Under 25 Championships in Pilisjaszfalu, Hungary. They also won the 2020 Piaff Forderpreis finals.

In February 2022 owner Andre moved Sunfire to the horse dealer's yard Helgstrand Dressage in Syke to be sold. There he was ridden by Leonie Richter.

In June Barbara Bertschinger bought Sunfire as a second Grand Prix iron in the fire next to her 16-year old Bavarian bred Sir Schiwago (by Sir Donnerhall x Lanciano), which she also bought in Denmark, and her home bred 15-year old Swiss warmblood Sonnenbergs Solisco (by Sancisco x Brentano II).