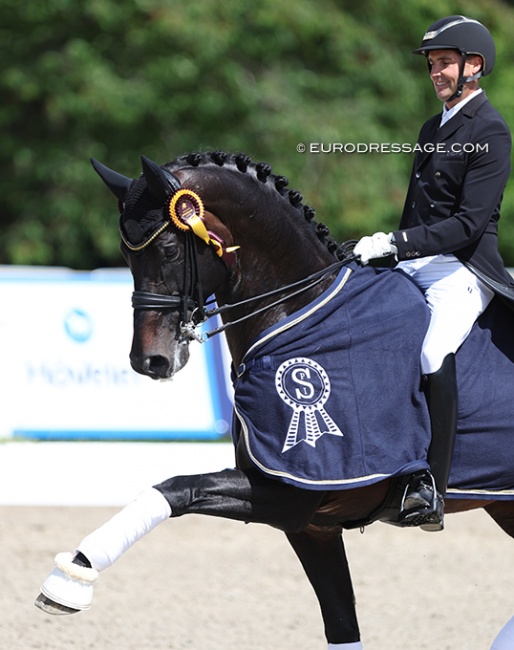 The Aachen Dressage Days are beautifully hosted by Renate and Franz-Josef Dahmen of the Aachener Dressur Verein, who found a second home in Hagen after the Aachen show grounds were unbookable for these two mini format CDI’s in May and June. The event turned out to be a massive success as the starter lists at jug tour level were filled to full capacity in no time.

With the 2022 World Championships in Herning on the horizon, the action is literally heating up in the dressage arena. Most riders have 4 July as deadline for achieving their MER (Mininum Eligibility Results) score to be eligible for a nominative entry for Herning. With only a few shows left in Europe in the next few weeks, the fields are filled to the brim, with Hagen bringing no less than 42 Grand Prix riders afoot from 25 different nations!

Riders from the more "exotic" dressage nations such as New Zealand, Cyprus, Palestine, India, Mexico, Thailand, Qatar, South Africa, Armenia, and even Luxembourg and Ireland came to Hagen to pursue their ticket to the season highlight in Herning. While these "little ones" were making equally brave and timey and money consuming efforts to reach their goals, at the top echelon the global players are also breathing down each other's neck to capture a team spot and please the team selectors.

The 2022 Aachen Dressage Days seemed to be all about Denmark with the Danish officials - "consistent expert coach" Wolfram Wittig and sport chef Anne-Mette Binder - on the sideline to witness Helgstrand clinch his second, required MER score to ride at the final Danish team selection trial in Aachen in two weeks, and Daniel Bachmann Andersen present a new rising star, Zippo I.M., as second iron in the fire for team consideration, alongside Marshall Bell. Helgstrand conveniently sold team horse Marshall Bell to Austria before the 2022 World Championships, but that strategy boomeranged as new owner Nicola Ahorner decided to return the horse to Bachmann to try for the Danish team.

Andreas Helgstrand's second attempt to return back on the Danish Grand Prix team is the talk of the town this season. While in 2021 his Tokyo effort with Fiontini did not come to fruition, this year he's going full blast with two young 8-year olds - Jovian and Queenparks Wendy.

At Jovian's national Grand Prix debut in March and international debut in Aalborg in May, it became obvious that this world class, macho mover has the "wow factor" - at least in the extended trot and canter - but this big bodied, power horse is still extremely green and unbalanced. Helgstrand and Jovian are able to bamboozle the judges into a fourth straight victory, with all that flash and spectacle, but in Hagen one thing became crystal clear, it's Queenparks Wendy who is stealing the show!

The huge Jovian (by Apache x Tango - co-owned with Cathrine Rasmussen) is like a skyscraper amongst big buildings - tall in height, big in gaits, handsome face and neck, and loaded with charisma. The testosterone is racing through his veins and there was little inner peace and relaxation to be seen in this young man. Profusely sweating, big eyes on the surroundings, and grinding his teeth during the warm-up as well as in the test, Jovian appeared challenged by the task at hand, despite all his natural ability and giftedness.

The halt at entry was a bit crooked to the right, but the rein back had very good diagonality. There was no bending in the corners. The half passes are very ground covering, but the one to the left was smoother and more regular than the one to the right. All extensions forward are very impressive, especially the canter extension, but as soon as it comes to collection, closing the frame and self-carriage, Jovian cannot hide his inexperience. The passage is certainly lofty with much airtime, but is it really well carried from behind? The walk part was good. The pirouettes are small and could develop more uphill tendency. The two tempi changes were big but he swung heavily to the right, the ones were correct but you heard the horse labour through them. The zig zag was not balanced and the biggest problem point is the piaffe: the horse really struggles and curls himself up into a ball, leaning on the forehand, diving deep and crossing the legs while bopping with his hind. The piaffe is the epitome of collection and self carriage in is in the classical tradition the preparation to the levade, which means the horse needs to drop in the haunches, climb in the withers, poll highest point, airbound. Jovian does the exact opposite: he becomes a round ball, earthbound. This wonderful horse is just very green, not yet able to carry himself sufficiently from behind. Another year will do wonders.

The judges' panel in Hagen consisted of four 5* routiniers - Evi Eisenhardt, Ulrike Nivelle, Jean-Michel Roudier, and Francis Verbeek van Rooij -- who were joined by newcomer judge Vittoria Barba from the Philippines. They were all in awe by the glitz and glamour of Jovian. Three of them saw Jovian as the winner, two had him second. The total score was 76.348% for the victory with Eisenhardt (GER) on the low score (75.109%) and Verbeek (NED) on the high score (78.913%).

While Jovian took highest honour in Hagen, it was in fact his 8-year old stall mate Queenparks Wendy who stole the show and showed much more readiness and maturity for the Grand Prix workd. It's always the girls who lead the way, joke intended.

Co-owned by the rider and Danish entrepreneur Bolette Wandt of Chateau de Fontaine, Queenparks Wendy is by Sezuan x Blue Hors Soprano and placed fourth at last week's Danish Dressage Championships, from which Jovian was spared. Wendy joined Jovian in Hagen to place second in the Grand Prix with 74.3790%. Her marks ranged from 73.152% (Roudier) to 76.196% (Barba).

The pretty black mare is such a fighter, tuned into her rider and so willing to please. She did stand twice in a stretched halt and the left half pass was more elastic than the right one, but the trot extensions had good overtrack and the passage was expressive and off the ground, although the self carriage could still be better. Also the piaffes were decent, although slightly unbalanced in the front. There was a hiccup in the strike-off to canter, the extended canter was good, but the flying change that followed was difficult. The zig zag was correct but could be more uphill oriented in front. The one tempi changes were laboured but correct. The left pirouette was a small volte, the right one had more sit. Overall it would be nice to see the mare swing more naturally and elastic over the back. The final piaffe at X was crooked to the right.

Wendy still had lots of small issues to improve, but she appeared much more comfortable with the work and gave a far less strained impression than Jovian. At least today in Hagen, this young lady proved she is more up to the challenge than Jovian, only the stallions inflated scores stole her thunder.

With very little aids and a quiet seat, Bachmann brought the best out of this horse, whose walk is not the greatest with an edgy collected walk (close to lateral). The piaffe is still a work in progress but in the second one in the Grand Prix test one could immediately see how the horse in a 6-minute time frame can show the potential in store. The trot extensions were well ridden, although the second one was not crisp regular. The two tempi changes straight, the extended canter uphill, the zig zag well ridden, the ones really big and forward and the pirouettes were small, but the exit of the right one needed to be tidier. Bachmann finished with a smooth final centerline.

Finnish Henri Ruoste has achieved career highlights this past year on the Belgian warmblood Kontestro DB, but for the Aachen Dressage Days he dusted off his 14-year old Danish warmblood Rossetti (by Romanov x Midt-West Ibi Light), who last competed internationally 14 months ago at the 2021 CDI Hagen. The bright bay is quite a hot horse able to score consistent 7s on the board. They finished fourth with 73.587%.

Nicole Wego-Engelmayer and the Russian owned Saphira Royal (by Sam Amour x Monteverdi) were gifted the fifth place with 72.261%. The 13-year old Rhinelander mare is a very refined looking, elegant horse who showed superb tempi changes, but her passage looked edgy and in the piaffe she got small and crooked.  In the FEI database Saphira Royal is listed as co-owned by Russian Elena Knyaginicheva as well as her family's German company Equitorus GmbH. The FEI's ban of Russian horses to international competition - because of the War in Ukraine - is easily circumvented by National Federations (in this case the German Equestrian Federation) who submit a change of ownership (on paper) to the FEI.

Finnish Emma Kanerva gave a beautiful display of proper horse training with Gert Saborowski's 10-year old Oldenburg gelding Mist of Titanium (by Millennium x Diamonit). The dark bay, almost black gelding is so nicely produced, always soft, light and elastic in the contact. The piaffes are not the scopiest, but are nice and easy. Also the tempi changes and extensions were very well ridden. She scored 72.196% for sixth place.

British Laura Tomlinson and Ursula Bechtolsheimer's 12-year old KWPN gelding Fallatijn (by Vivaldi x Cabochon) won the Grand Prix Special at the first Aachen Dressage Days held in May and returned to Hagen for another big score that could put her in British team contention for Herning. Today, her mark ended being 71.891% for a seventh place. The chestnut gelding is very Dutch moving with a lot of knee action, which often makes him hectic, but today Laura had him going smoothly. The tempo was more consistent although in collected walk he came close to being lateral. The passage showed much improvement, but in piaffe he still crosses behind and travels forward. Overall it would be nice to see him a bit more up in the poll.

The best piaffe of the day came from the 9-year old Lusitano stallion Imperador dos Cedros (by Rubi x Hostil), who gave Luxembourg rider Fie Skarsoe (Danish born) his third MER score of the season. In Hagen they got a personal best of 71.848% and are now coached by Nathalie zu Sayn-Wittgenstein. The grey stallion is owned by Manon Ackermann.

Text and Photos © Astrid Appels  - NO REPRODUCTION ALLOWED
Eurodressage photographed all riders competing at the 2022 Aachen Dressage Days. If you are interested in our photos for social media or prints, email us.