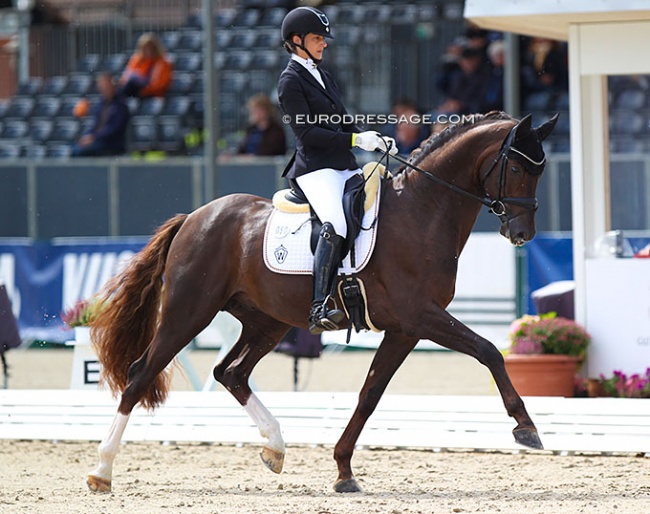 Belvedere DB is a 2016 born Westfalian stallion by Belissimo M out of Donara (by Danone I x Rubinstein x Feuerschein I). He is bred by Jurgen de Baey.

As a 2.5 year old colt, Belvedere SD moved into the care at Johann Hinnemann's Krusterhof in Voerde under the supervision of Stefanie Wolf.

The liver chestnut was licensed as a 3-year old at the 2019 Westfalian Saddle Licensing in Munster-Handorf and later on approved for Oldenburg, Hanover, and Baden Wurttemberg.

He did his 14-day suitability test in Adelheidsdorf, scoring 9.09 for dressage and 8 for show jumping. He did his sport test I in September 2020 in Munster and scored 8,68 points. His second sport test was in January 2021 and he scored 9.20 points.

Owned by Isabell Nowak of riding center Sonnenbrink, the liver chestnut was first competed by Kevin Lensky and Isabell herself before Stefanie Wolf took on the ride in 2020. He qualified for the Bundeschampionate but did not compete in Warendorf. He was 2020 reserve Westfalian young horse champion. In 2021 he was selected to represent Germany at the 2021 World Young Horse Championships in Verden, where they placed seventh in the 5-year old finals with 8.76 points.

Future in the U.S.A.

Belvedere DB has been sold to a sponsor of U.S. Dressage Champion and Tokyo reserve team rider Nick Wagman.

"I rode him twice in Germany, and fell in love with him right away," Nick told Eurodressage. "His training is so solid, and his temperament is amazing. Plus, he is drop dead gorgeous."

Belvedere DB will not be standing at stud in the U.S.A. His future will be one in sport and therefore he will be cut.

"He will be gelded soon and then Stefanie Wolf will get him fit again before he comes to the States," Nick explained. "We are hoping to have him here this spring so that Belvedere and I can become partners. His new owner has no real interest in breeding, and as a competition horse it makes travel much easier. He will be collected before he’s gelded, so there will be semen available. When you are in the states and have to travel abroad, the restrictions with stallions just adds another level of stress. Our goal is truly to have a successful competition horse."

"I'm very happy that Belvedere has found such a great new home. At the moment he is still here with us and I won't let the opportunity pass by to accompany him myself to his new home in California," Stefanie Wolf added.

When asked if Belvedere is an Olympic hopeful for Nick, he replied, "we are in no rush. He will tell us how quickly he wants to develop. I think LA is certainly a real target. Don John is feeling great. I think Paris might be for him."