Sandra Nuxoll's Hanami Sold as Under 25 Hopeful for Louisa Deutschbauer 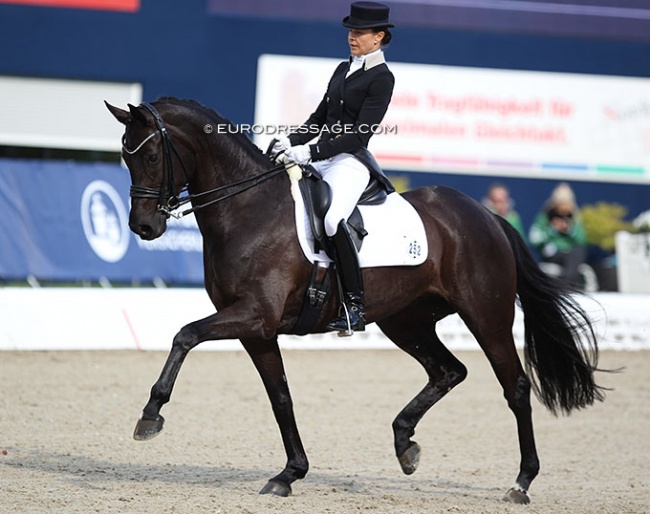 Hanami is an 11-year old Oldenburg mare by Dante Weltino out of Hamiera (by His Highness x Ramires x Priamos xx). She is bred by Hubert Brömlage.

The mare made her show debut as a 5-year old in 2016 under Anja Teute.

She sold to then Austrian Sandro Nuxoll, who runs a boutique training and sales yard in Germany. The new duo made its debut at local shows in Germany in 2017.

In 2018 Nuxoll moved the 7-year old black mare up to Prix St Georges level and rode the German selection trial for the World Young Horse Championships but was not selected. They also contested the Nurnberger Burgpokal qualifiers that year.

In 2019 Hanami moved to developing Grand Prix level and in 2020 she matured into a highly promising Grand Prix horse, qualifying for the 2020 Louisdor Cup Finals in Frankfurt, which Nuxoll ended up winning with her other Grand Prix horse Bonheur de la Vie, while Hanami placed fifth with 72.860%.

In 2021 the pair made its international show debut at the CDI Herzlake,  where they were 7th in the Grand Prix with 69.674% and 10th in the Special with 67.830%. Nuxoll declared for Germany in 2021. Their last show together was in Ankum at the beginning of November 2021 where they were back at 72.5% in this national Grand Prix.

In November Hanami sold to German national dressage rider Louisa Deutschbauer.  The 20-year old is based in Merzig-Wadern, where her family owns and runs equestrian centre Ballern.

Louisa has been competing up to Young Riders/S-level with the now 16-year old Rubin Noir (by Rascalino x Sugunas xx), which they bought in the winter of 2018-2019 at Helen Langehanenberg's where Sabrina Gessmann was training and competing the horse for owner Jens Bartling, and with the 11-year old Der Wademärker (by Dancier x Weltmeyer), previously shown by Esther Maruhn up until 2019. She has also been campaigning the 7-year old Flavour (by Floriscount x Sandro Hit) at A-level.

Deutschbauer made her international show debut in June 2021 at the CDI-PJYR Kronberg, where she rode Rubin Noir to a 6th and double 9th place in the Young Riders division.

What the Future Holds

Deutschbauer now has a ready Grand Prix horse for her to make the transition from Young Riders to Under 25 Grand Prix level in the future. Next month Germany will be hosting the selection trials for the Piaff Forderpreis show circuit in Warendorf.

Nuxoll can be proud of her achievement as a trainer as this is the third horse she has been able to produce from young horse level to Grand Prix and sell for a rumoured six figure amount. Before Hanami she sold Grand Prix horses Stand by Me (Lisa Müller) and Destiny (Kristina Sprehe). Nuxoll has not (yet) sold her Louisdor cup winner Bonheur de la Vie and is now also focusing on her new rising hopes Found a Hit (by Foundation x Sandro Hit) and brand new acquisition Nabola (by Intro K x Rhodium).

"Louisa and beautiful Hanami are a great match," Nuxoll told Eurodressage. "Nabola will be only 4 years old this year, but shows great potential and she was exactly my type of horse with a good engine and activity from behind and a top character. I fell in love immediately. My intention is for sure to develop her to FEI leve. Found a Hit is on the way to Prix St. George level now."