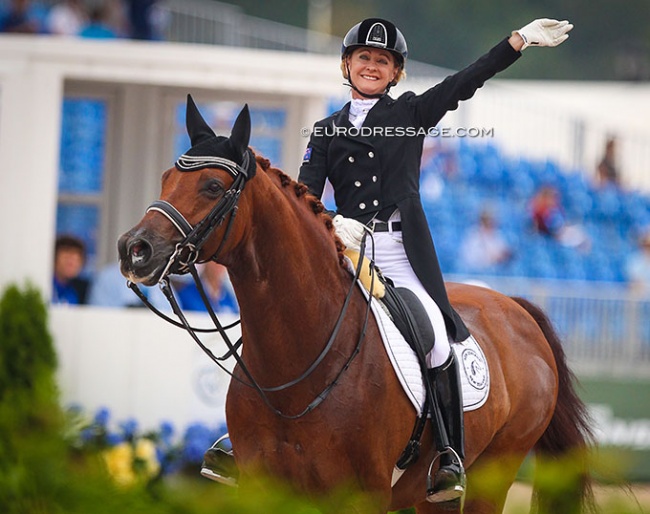 Julie Brougham, one of New Zealand's most distinguished Grand Prix dressage riders, has passed away. She was 67 years old.

A Beacon for New Zealand Dressage

Born in 1954 in Palmerston North, Brougham began riding at the age of 4 and found her passion in dressage.  She made her name at national Grand Prix level aboard JK Supersonic.

In 2008 she travelled to Germany to find her next dressage partner after selling Supersonic. During a visit at Ton de Ridder's stable in Aachen, Germany, she discovered the unruly, recently gelded Rhinelander Vom Feinsten (by Fidermark x Weltmeyer) who became her career making and life changing horse.

in October 2018 Brougham was diagnosed with abdominal cancer.

She underwent  six rounds of chemotherapy to fight the aggressive cancer. She was hospitalised with complications after the first round and had surgeries to remove her ovaries and fallopian tubes and part of her large bowel. A stoma was inserted, but the next operation to reverse the stoma failed, which led to more emergency surgery, and the stoma became permanent.

She recovered and returned to the arena with Vom Feinsten at national level in September 2019. On 1 May 2021, the pair rode its last show at Dressage by the Lake at Takapoto Estate, where they  won the Grand Prix with 71.812% and Freestyle with 74.706%. Vom Feinsten was retired from sport in a special ceremony at this show.

"Julie has been many things to many people within our sport - a fellow athlete, a friend, a judge and an inspiration in everything she strived for and achieved," said Dressage New Zealand. "Her passion for all things dressage and the vast knowledge she generously shared with others will be a continuing legacy for riders who dream to follow and emulate the new standards she and Steiny set for New Zealand."

She leaves behind her husband David and children Nicholas and Katrina.