Anja Beran: "The Equestrian World Has Lost the Image of a Correctly Looking Young Horse" 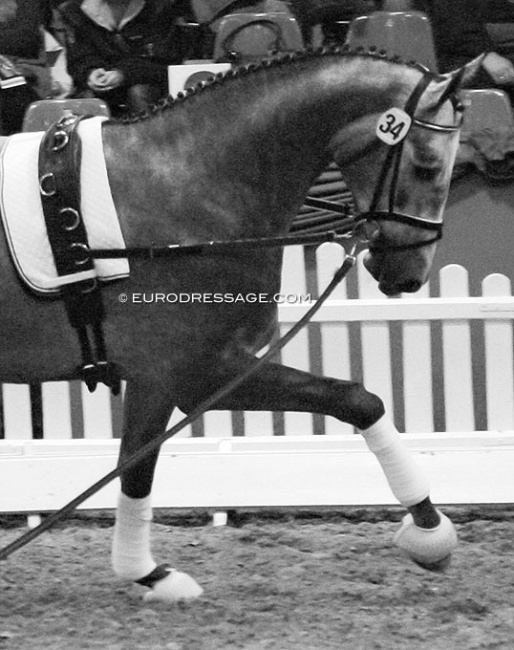 Beran might not be a familiar face in the high performance competition world, but she is in the broader dressage world. Beran has trained among others with renowned Portuguese trainer Valença before establishing her own training yard in Germany. She is a highly sought after clinician, who has been featured at Equitana. She is regular author of training articles for specialist dressage magazines as well as has written her own books, works with Pferdia.tv, and has produced instructional films on DVD. She collaborates with the Marbach and Schwaiganger state stud. "Classical dressage is the basis for training in keeping with the requirements of the horse which works for EVERY horse and is in no way limited to baroque breeds," is her motto.

A hot topic which has intensely occupied my mind lately is the lunging and the use of standing side reins at the stallion licensing.

Promising young stallions, horses with perfect bodies and unbelievable movement potential, are presented again this year at the licensing on the lunge line, but how?!

Way too tight, they are pushed to the limits of their capabilities over the natural tempo to show exalted movements, no longer according to their nature, and this at an age when they should have been in the field with young colts their age, romping around to develop themselves physically and mentally in an optimal way.

There are many videos on social media, but here is an example.

It is also clear that this 2.5 year old horse was not lunged for the first time yesterday. No, bringing him in from the herd started too early, the start of the training is rapid. This young colt is in the middle of growing up, tendons, ligaments, joints, nothing has matured, is not ready and still they have to produce top performances, they have to shine, shimmer and hurry to impress their potential buyer.

None of those responsible say a word about the health consequences from this extreme exertion.

“In normal lunging the side reins are attached to the bit rings from a fixed point. The lunge is on the inside bit ring. This evil technique is based on general thoughtlessness. [...] The worst hand cannot cause as much pain in the horse's mouth as the almost absolute restraint of tying up the horse with standing side reins or draw reins attached to the saddle or lunging girth. […] But even in an experienced horse, such restraint causes dullness and it is an unjustifiable rudeness. It is my conviction that every fixed side rein ruins the mouth more than helps. [...] It is time to end the shameful recklessness" (Quote from Fritz Stahlecker in the book "Pferde, meine Schüler, meine Lehrer – Dressurreiten auf dem Prüfstand").

Can you imagine the pull the mouth with such tightened standing side reins? Would you like to ride a young horse, which is used to being confronted with with such forces, with a fine hand?

What does lunging according to the classical training principles, which this short video shows:

The horse learns to trust its handler, is slowly getting accustomed to the aids, he can play off his energy from the stable, it can moves its head freely and never it has been brought into a constricted position. A competent training will never "shape" its horse on the lunge line. Suppling, straightening and the shaping of a horse's body happens under saddle or during work in hand.

Maybe the equestrian world has lost its image of a correctly looking young horse. This is why I dedicate a complete chapter to this theme in my book "Training the Eye - Recognizing Horse Friendly Training".