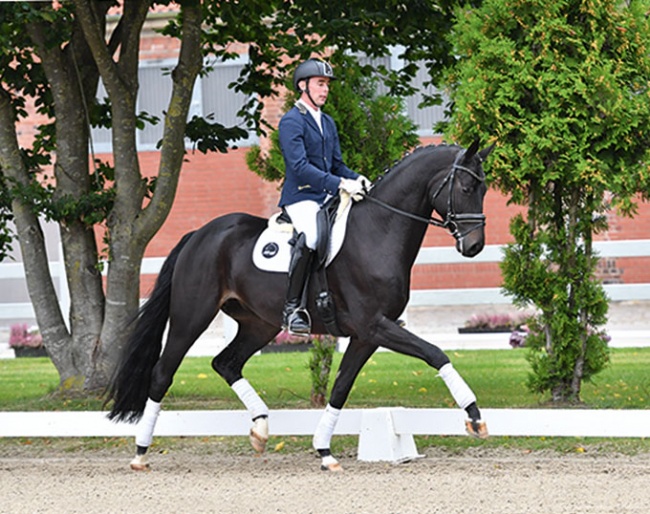 For the fifth and last time this year, riding horses could be bought online at the Verden Auction, which concluded on 20 November 2021. Frido (by Finest x Spörcken) was the price highlight with a knock down price of  56,000 euro.

Of the 41 horses offered, all were sold. 24 will stay in Germany, 17 will travel abroad to eight different countries. Bidders from Spain and France acquired the most horses with four purchases each.

Returning customers from Spain secured the top price of the auction: a bay gelding named Frido (by Finest x Spörken), bred by Julia and Dr. Arndt-Friedrich Echte and owned by Monika Decke. During the one-week bidding period on the internet as well during the twelve-day training in Verden, the interest in the gelding became apparent.

The most expensive show jumper was Quality Top (by Qualito x Grey Top). He cost 46,000 euro and will stay in Germany. The mare was bred and sold by Werner Rückgauer.

The average price improved by a good 5,000 euro compared to the previous year, to an average of 21,634 euro. This is a new record for the Verden auction in November. Twelve horses were sold at 25,000 Euros and more, another 17 achieved prices of 15,000 Euros and better.

Defice (by Don Martillo x Scolari) fetched 45,000 euro and will stay in Germany. She moves to Freiberger Hof.  Dobrina (by Dohnanyi x Hochadel) also stays in her birth country for 34,000 euro.

An American client bought Baileys H (by Benicio x Danciero) for 36,500 euro and the chestnut will be joined by the 3-year old Davidson by Don Darius x Garant) for 27,000 euro.

Jumper Auctions to Finish the Year

The riding horse collection was complemented by twelve 2.5-year old jumping stallions. These young sport aspirants cost on average 12,000 euro. Two of them will leave Germany and go to Poland or Austria.Question of Honour (by Qualito x Acorado) was the best seller at 17,500 euro. A renowned trainer from near Verden bought the bay stallion for an American hunter and show jumper stable.

In 14 days, on 4 December, licensed and unlicensed show jumping stallions of the 2019 crop will be auctioned in the Niedersachsenhalle as part of the stallion market, before riding horses return to the auction ring at the beginning of next year in an online auction on 22 January 2022.