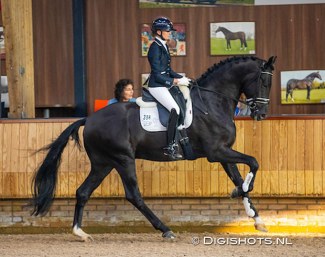 Dutch young professional Zoe Kuintjes has received a new horse to ride, 5-year old KWPN gelding Lacrosse RS2, as she officially leaves the youth riders' divisions in 2022 with no immediate Under 25 horse to move on to.

The 21-year old Kuintjes competed in the international youth classes, from pony to young riders level, between 2013 and 2021.  She represented The Netherlands at the 2015 and 2016 European Pony Championships and was first reserve for the Dutch team that rode at the 2019 European Young Riders Championships in San Giovanni in Marignano (ITA).

In 2021 she began her career as a professional rider at Kirsten Brouwer's stable and got the ride on sales horse Don Clorentino des Paluds in her final year as a Young Rider, but the horse sold in June, ruling her out of Dutch team contention. In July 2021 she competed her long-time ride Desperado (by Florencio x Clavecimbel) at the CDI Meerle. Desperado sold three weeks ago.

Kuintjes will now continue as a senior with the 5-year old KWPN bred gelding Lacrosse RS2 (by Ferdeaux out of Wiona Utopia RS2, by San Remo x Jazz). The black is bred by RS2 Dressage and has been partly sold to Kuintjes.

"We have him in joint ownership," RS2 Dressage's Robin van Lierop told Eurodressage. "He's a very talented horse and we have known Zoe and her mom Ivonne for a long time. When they asked us if we had a talented horse for Zoe, she tried out LaCrosse and there was an instant very good connection. Because we have such a big group of horses, it's a good option for us to see our horse and breeding project in this partnership for the future."

Lacrosse RS2 was the first colt born at RS2 Dressage and got approved at the 2019 KWPN Stallion Licensing, where he finished sixth in the champion's ring. He competed in the 2019 KWPN autumn performance test but dropped out mid-test. He was re-presented at the 2020 KWPN Stallion Under Saddle presentation in Ermelo, but then pulled from the licensing process and gelded.

"We decided it was better for him to geld him," said Van Lierop. "At the time (of the performance test) he was growing a lot and had some difficulties in his body. At home he went well, but if you took him out he was a lot of stallion. also at home in the field he couldn't peace as a stallion, so at a certain point you have to decide what is best for him."