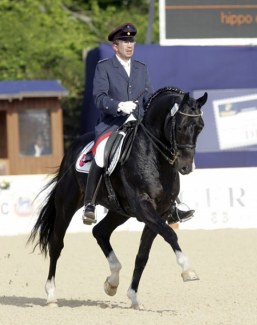 The former Hanoverian licensed breeding stallion and international young riders' horse Contendros Bube has passed away on 20 June 2021. He was 19 years old.

Contendros Bube was a Hanoverian by Contendro out of Pik Bubes Girl (by Pik Bube I). He was bred by Friedrich-Wilhelm Maack.

Contendros Bube was licensed for breeding at the 2004 Hanoverian Stallion Licensing in Verden.  He sold to the Celle state stud.

His first competition was in May 2005 under Ralf Balzer. He then had a 3-year break from showing, but returned to the arena in June 2008 under Hans-Peter Klaus, who competed him through 2011 from L-level to small tour level.

In 2010 Klaus once showed the stallion in a CDI. He rode him in one Prix St Georges test at the CDI Lingen.

In 2011 he sold to Marita Runge as a youth rider's horse for her daughter Sarah Runge.

The new combination made its show debut in Neu-Anspach in September 2011 at S* level. They had an international show debut in a winning way at the 2012 CDI Vejer de la Frontera, where they won the preliminary test with 70.093% and placed second in the team and individual test. They went on to show the next weekend in Vejer, where they won twice more. Two months later they competed at the CDIO-Y Saumur and won the kur to music. Their fourth and last international was the 2013 CDIO-Y Saumur, where they placed second twice.

Saumur in 2013 was the horse's last international show. Nationally Runge rode the horse in two more competitions: a local show in Neu-Anspach in August 2013 and in Donaueschingen in September 2013.  At age 11 Contendros Bube did his last show there.

Contendros Bube was retired from sport because he was diagnosed with a heart condition.

"I couldn't compete him further because of issues with his heart and sadly we had to put him down today," Runge told Eurodressage yesterday.