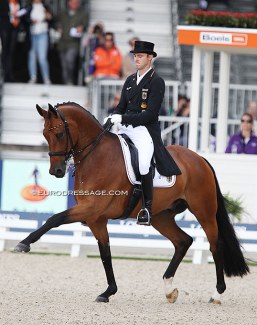 Sönke Rothenberger and his top ride Cosmo will not be competing at the 2021 German Dressage Championships in Balve on 1 - 4 June 2021, the first of two mandatory German Olympic team selection trials.

The horse has been withdrawn from Olympic consideration.

For the 2021 Tokyo Games only three riders make a team and one combination will be a travelling reserve.

At the 2021 German Dressage Championships all German A-Olympic squad riders will go head to head in the first trial. At the end of June, the second trial takes place at the CDI Kronberg. The German team will be announced on 5 July 2021

They won team gold there, but the pair did not make it to the freestyle finals as fourth scoring German duo despite a 6th place and 78.115% score in the GP Special.

It was already an ominous sign that Cosmo was not listed in the German squads of 2021 as the horse had not been shown in such a long time. He was originally entered for the CDI Munich but withdrawn a few days before the show.

Today the news was confirmed by the German Equestrian Federation that Cosmo has been withdrawn from German team contention this year.

"Because the gelding is not at the performance level of the years before, the Rothenberger family decided to not enter Cosmo for team selection for this year's Championships," the FN press release read.

Rothenberger will be competing his second GP horse, Santiano R, in Balve.