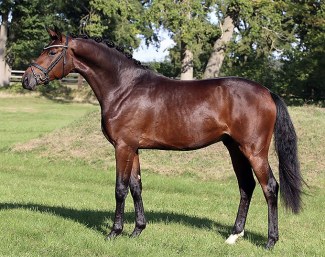 The 2.5 year old stallion prospect Revenge became the best seller of the 2020 Sandbrink Special Auction which concluded on 16 October 2020.

For the first time Kerstin Klieber and Stefan Sandbrink hosted an auction, with a few partners, of 2.5 year old stallion prospects, broodmares and embryos.

A collection of 22 lot was offered for sale, 21 of them came up for auction, and the majority sold to new owners. Over 100 bidders from all continents had registered for this auction, but the event was a Hybrid one with also live bidding in the indoor arena of the Sandbrink rearing barn in Idsingen, Germany.

The 2.5-year old Revenge (by Revolution x Federweißer x Mytens xx) became the best seller of the lot. The bay colt is accepted to the Redefin Stallion Licensing in November 2020 and sold for 95,000 euro to a Russian dressage stable.

Three broodmares were offered for sale and the top selling one was Rudinate (by Sir Donnerhall I x Donnerschwee ). She is the full sister to licensed stallion Showdancer (Gestut Bonhomme) and in foal to Oldenburg licensing champion Global Player. She sold for 21,000 euro to the Jen Vanover of Maplewood Warmbloods in the U.S.A.

Two embryos were offered for sale out of 2016 Bundeschampion mare Deluxe. The Vitalis one sold to Roos van Schaik in The Netherlands, the one by Sir Donnerhall will stay in Germany.