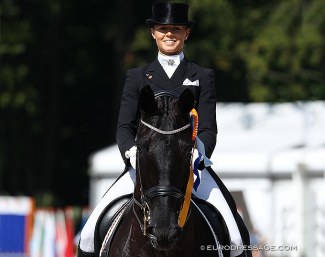 German Grand Prix rider Stella Charlott Roth will be joining the team of riders at Gestüt Bonhomme in Werder, Germany, as of 1 January 2021.

For the past five years the 30-year old Roth has been working on building an independent business as a trainer/rider in the Vechta area. She has now decided to give that up and became employed by the Gutmann family at Bonhomme.

Roth's first claim to fame came in 2010 when she was a member of the gold medal winning German team at the European Young Riders Championships in Kronberg. Aboard Diva Royal (by Don Frederico x Warkant) she also placed sixth in the freestyle.

The ride on Diva Royal was then given to Roth's trainer at the time, Dorothee Schneider, who ended up taking her to the 2012 Olympic Games in London, where they won team silver.

A few months later, Roth won the 2012 Piaff Forderpreis Finals, the German Under 25 Championships, in Stuttgart.

Diva Royal was meant to take Roth straight to the highest echelons of Germany's senior Grand Prix division, but she sustained a career ending injury and never returned to sport. At an equine clinic, where she was for a routine operation, an accident happened when the veterinarian team removed the nose twitch from the sedated mare.

Stella competed the youngster Dubarry B at the 2013 Bundeschampionate in Warendorf and in 2014 Roth returned to the show ring in the U25 division, campaigning the 12-year old Rubin Action (by Rohdiamant x Grundstein II). They finished 6th at the German Championships in Balve.

In 2014 the pair moved to the senior division and competed internationally through 2018.

In 2015 the  Economics graduate at the Goethe University in Frankfurt decided to start her own business at the Meurer equestrian centre in Bippen, Germany.

She settled at Meuer in Quackenbruck in March 2015 and in 2017 moved to equestrian centre Gramann in Vechta, Germany.  She received the ride on the Lodbergen Dressage Performance Centre owned and licensed stallions For Final and Rock for Me.

In the autumn of 2019, Stella welcomed Katrin Pitriff's Echt Stark(by Royal Highness  x Fielmann) to her barn. The pair's international show debut got delayed when in November 2019 Stella got throw from a horse and fractured her pelvis in three places. She had to stay fairly immobile for six weeks.

Roth returned to the saddle after her rehabilitation and made her international show debut on Echt Stark at the CDI Herzlake in September 2020, placing fourth in the Prix St Georges and third in the Intermediaire I with 71.029%.

Stella has decided to move a third time, now across the country to the Berlin area where she will assist head rider Lena Waldmann at Gestut Bonhomme.

She will start working at Bonhomme on 1 January 2021.

"Life is change," she told Eurodressage. "I think it’s a very interesting opportunity to become part of a good team there in an environment, where training and conditions are perfect for both, horses and riders. I’m looking forward to it."